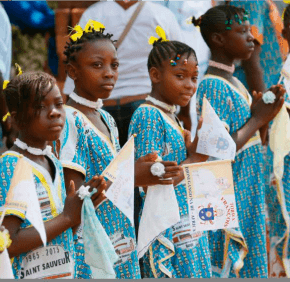 “Unity in diversity is a constant challenge, one which demands creativity, generosity, self-sacrifice and respect for others,” he said, visiting the country where political and ethnic rivalries also have split people along religious lines.

Pope Francis and his entourage followed Catherine Samba-Panza, the country’s interim president, in a convoy to the presidential palace about five miles away.

The highway was lined with tens of thousands of people, many of whom waved palm or other tree branches. In addition to armed forces doing crowd control, armored U.N. vehicles were parked at almost every intersection.

Samba-Panza was appointed in January 2014 to lead the country out of the civil war that began in 2013 and toward democratic elections. The vote had been scheduled for October, but a new outbreak of violence between predominantly Muslim factions and predominantly Christian factions forced a postponement until Dec. 27.

Speaking at the presidential palace, Pope Francis told Samba-Panza and civic leaders that it was his deep hope that the vote would “enable the country to embark serenely on (a) new chapter of its history.”

As he often does when trying to encourage a nation’s leaders and people, Pope Francis looked to the nation’s ideals – “unity, dignity and labor” – telling the people that they and all their neighbors share the same hope to see those ideals realized.

Restoring harmony and forging unity, he told the president and civic leaders, will require “avoiding the temptation to fear others, the unfamiliar and what is not part of our ethnic group, our political views or our religious confession.”

“Unity, on the contrary, calls for creating and promoting a synthesis of the richness which each person has to offer,” he said.

Access to education, health care, adequate nutrition and decent housing must be provided to all, Pope Francis said. “In effect, our human dignity is expressed by our working for the dignity of our fellow man.”

“Those who have the means to enjoy a decent life, rather than being concerned with privileges,” he said, “must seek to help those poorer than themselves.”

The Central African Republic, rich in natural resources, can and must do more to develop job opportunities, but must work with local and international organizations and businesses to ensure that the use of natural resources does not become an abuse of them.

The country is located in the fertile Congo Basin, known as the “green heart of Africa,” and decisions about resource exploitation can “affect the entire planet,” the pope said.

Pope Francis also thanked all of the international organizations and governments helping the Central Africans move toward peace. “I heartily encourage them to continue along the path of solidarity in the hope that their commitment, together with the activity of the Central African authorities, will help the country to advance, especially in the areas of reconciliation, disarmament, peacekeeping, health care and the cultivation of a sound administration at all levels.”

After all the uncertainty because of the security situation, the fact that the pope arrived is “a blessing from heaven,” Samba-Panza said. It is “a victory of faith over fear and disbelief and a victory of the compassion and solidarity of the universal church.”

The president thanked the pope for giving her people a “lesson of courage and determination” by visiting despite the recent violence.

The country, which was ruled by a succession of military dictators from 1962 to 1993, also has suffered from repeated coups. In the process, Samba-Panza said, “Our country has not been spared from devastating winds that sowed disunity and distrust” between ethnic and religious groups.

Samba-Panza – a Catholic and longtime politician – publicly addressed the pope just a few hours before he was to open the local celebration of the Year of Mercy by opening the Holy Door at Bangui’s cathedral.

“On behalf of the ruling class of this country but also on behalf of all those who contributed in any way whatsoever to his descent into hell,” she told the pope, “I confess all the harm that has been done here over the course of history and I beg forgiveness from the bottom of my heart.”

“Abominations have been committed in the name of religion by people who call themselves believers,” she said. “But how can one be a believer and destroy places of worship, kill one’s neighbor, rape, destroy another’s property?”

She prayed the pope would exorcize “the demons of division, hatred and self-destruction.”

After the meeting, Pope Francis went three miles by popemobile to a refugee camp set up around a Catholic parish. Some 3,300 people live there and most are women and children.

Little children had lined up holding torn pieces of light fabric with words written on them: peace, love, friendship, equality.

The pope told the crowd he had read the signs. “We work and pray and do everything possible for peace, but without love, without friendship, tolerance, forgiveness, peace isn’t possible.”

“May you all live in peace not matter what your ethnicity, religion, social status,” the pope said.

Choice is clear, pope says: Protect environment or destroy it