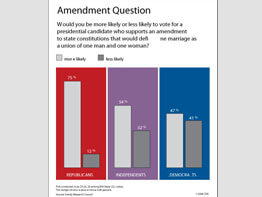 WASHINGTON – The Family Research Council released results of a commissioned national poll July 10 that indicates 58 percent of probable voters in the 2008 presidential election are more likely to vote for a candidate who supports traditional marriage protection amendments that will be on the ballots in California, Arizona and Florida this November.

The question posed by the Christian lobbying organization was worded: “As you may know, several states have measures on the November ballot that would amend their state constitutions to define marriage as the union of one man and one woman. Would you be more likely or less likely to vote for a presidential candidate who supports those amendments?”

Conducted by Wilson Research Strategies June 25-29, 800 likely voters nationwide were contacted via telephone by a live operator and screened to make sure they intended to vote in the upcoming general election, said Tony Perkins, president of the Family Research Council.

The poll has a margin of error of plus or minus 3.4 percentage points, Perkins said.

Perkins said the sample surveyed in each region reflected the percentage of the population that showed up to vote during the 2004 national election. He explained that the additional 12 percent from the South was not an effort to manipulate the poll results, but reflected the larger percentage that voted there.

The results show that 75 percent of Republicans polled were more likely to vote for a candidate who supports traditional marriage protection amendments, as were 54 percent of Independents and 47 percent of Democrats.

The results also show a difference among older Republicans and younger Democrats, with 76 percent of Republicans 55 and older more likely to vote for a candidate who supports traditional marriage protection amendments on state ballots, compared to 44 percent of Democrats between the ages of 18 and 54 who gave the same response.

However, Obama does support civil unions and McCain supports each state’s right to decide the marriage issue on its own.

“Marriage has religious and social connotations, and I consider marriage to be between a man and a woman,” Sen. Obama said in his answer on the Human Rights Campaign’s 2008 presidential questionnaire.

“If I was president, however, I would oppose any effort to stifle a state’s ability to decide this question on its own. Whether it was a constitutional amendment banning gay marriage or a bill like the Defense of Marriage Act, I would oppose such efforts,” he said.

The Defense of Marriage Act, signed into law in 1996 by President Bill Clinton, defined marriage for federal purposes as a “legal union between one man and one woman” and bars partners in same-sex unions from receiving federal benefits that are available to spouses because of their marital status, such as spousal Social Security benefits.