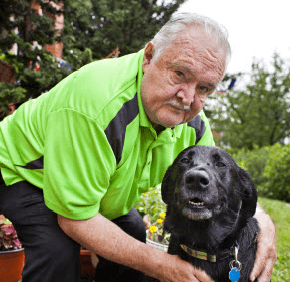 By Elizabeth Lowe
elowe@CatholicReview.org
Twitter: ReviewLowe
Hundreds of Catholics come to St. Benedict in Baltimore each week, but there is one faithful visitor who stands out.
Francis was one of 10 warm, wiggly puppies born more than four years ago in the parish rectory.
Adopted by parishioner Rodger Delker and his wife, Mary Katherine, Francis has become an integral part of the parish, visiting the grounds nearly every day and particularly its pastor, Benedictine Father Paschal A. Morlino.
As soon as Francis reaches the parish property on one of her frequent walks from Delker’s nearby home, the affable, tail-wagging pooch is unleashed and allowed to run free.
During the warmer months, Francis and Delker, 72, the parish handyman, typically visit Father Morlino as he tends the dozens of vibrant-colored plants outside the rectory.
“She’ll come over and nudge me,” Father Morlino said fondly, patting Francis on the head during a recent visit.
More than four years ago Father Morlino decided a visit to a veterinarian was in order after a stray dog – Francis’ mother – wandered onto the grounds of St. Benedict.
The vet informed Father Morlino the dog, which he named Elizabeth and kept for a time, was pregnant.
“This is all I need,” Father Morlino said he recalled thinking.
In preparation for Elizabeth giving birth, Father Morlino lined a large crate in the rectory with rolls of vinyl. A few weeks later, days before revelers rang in 2009, Elizabeth gave birth to 10 puppies.
“One, two, three, four, seven, eight puppies,” said Father Luis Leon, pastoral associate at St. Benedict when the puppies were born, and now a priest for the diocese of Covington, Ky. “After four hours, two more. They (the puppies) were big.”
The puppies, born two days after Christmas, were appropriately named Dasher, Dancer, Prancer, Vixen, Comet, Cupid, Donner, Blitzen, Rudolph and Nicholas.
Nicholas, however, later died, Father Morlino said. The nine remaining puppies were adopted by families eight weeks after their birth, including Rudolph, the runt, whose name is now Francis.
When Father Morlino named Francis, after St. Francis of Assisi, he didn’t realize she was a female puppy – hence the masculine name.
“I can’t believe how many people wanted a pup,” said Father Morlino, who noted most were adopted locally. “They all have good homes.”
“There was something about her personality,” said Delker, who first carried Francis home in his coat pocket. “She is the most intelligent and obedient pet I’ve ever had. She’s the perfect dog for me.”
Also see:
Parish surpasses campaign goal by 500 percent
PrevNext