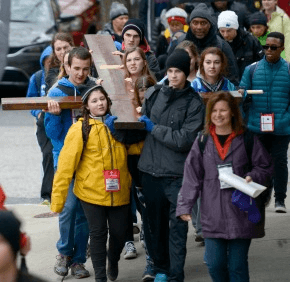 “I can see where God has been merciful to me.”

As Megan Kaiser, a young parishioner from Holy Family in Davidsonville, spoke her testimony in front of more than 300 attendees of the annual Youth and Young Adult Pilgrimage, many eyes began to well up with tears.

Kaiser spoke of the life of a military child – moving from place to place, missing her father when he was off on deployment, and the happiness she felt when her family was together.

She spoke of her father, Lt. Col. Christopher P. Kaiser, who, on home from deployment in August 2011, was killed in a car accident.

After the death of her father, Kaiser admitted that as her mother turned toward her faith for comfort, she turned away. She was angry, upset and confused with God.

It wasn’t until a youth conference in Steubenville almost three years later, that Kaiser reconnected with God.

Speaking before her peers at the March 19 “Walk of Mercy” Youth Pilgrimage in Baltimore, Holy Family, Davidsonville, parishioner Megan Kaiser shares a personal story on the unexpected loss of her father and how her faith was challenged during this difficult time in her life. (Kevin J. Parks/CR Staff)

During the sacrament of reconciliation, Kaiser finally let herself release all of her anger and confusion with God. to the priest. It was at that moment that the teenager truly began to pray again.

“I’ve come a long way from where I started,” Kaiser said. “I find I rely more on God now than I ever have. I’ve learned for myself how confession is a way to experience God’s love, mercy and help. We just need to turn everything over to God and experience his mercy.”

After Kaiser’s testimony, songs of praise and a blessing from Archbishop William E. Lori, the pilgrimage began with a full eucharistic procession from St. Mary’s Spiritual Center on North Paca Street to the Basilica of the National Shrine of the Assumption of the Blessed Virgin Mary on Cathedral Street.

Ready to spread the Gospel, area Catholic youths and their adult leaders have a little fun prior to the March 19 “Walk of Mercy” Youth Pilgrimage held in Baltimore. (Kevin J. Parks/CR Staff)

After arriving at the basilica, the massive group spent an hour adoring the Blessed Sacrament.

From there, the group continued toward War Memorial Plaza where they participated in a living rosary – despite being drenched with rain.

The second half of the day started at Cristo Rey Jesuit High School and Holy Rosary Church on South Chester Street. There, the group participated in the Stations of the Cross and a enjoyed a concert featuring Josh Blakesley.

Participants in the March 19th “Walk of Mercy” Youth Pilgrimage hold their crosses high for a blessing from Archbishop William E. Lori as part of the annual walk through Baltimore City to begin Holy Week celebrations. (Kevin J. Parks/CR Staff)

After arriving at St. Casimir Church in Canton, their final destination, the pilgrims commemorated Jesus’ entrance into Jerusalem at the beginning of Holy Week at the Palm Sunday vigil celebrated by Archbishop Lori.

The archbishop noted that although the weather could have been better, the grace of God was beautifully shown through the pilgrims. He challenged them to continue to grow in their faith.

“I personally find a lot of inspiration in all of you,” he said, “and I find joy in the hope that you bring to our church and to our world.”

Archbishop William E. Lori lifts a monstrance containing the Eucharist prior to the start of adoration of the Blessed Sacrament at the Basilica of the National Shrine of the Assumption of the Blessed Virgin Mary as part of the March 19 “Walk of Mercy” Youth Pilgrimage. (Kevin J. Parks/CR Staff)

Throughout the day, the pilgrims carried a large cross, symbolic with the crosses borne on a daily basis. As they walked from place to place, the pilgrims learned more about their faith at each stop.

Amidst the physical challenges of the walk, the rainy weather and the sheer exhaustion, the pilgrims truly walked in mercy with the Lord.