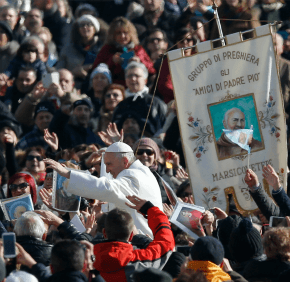 By Erik Zygmont ezygmont@CatholicReview.org
Twitter: @ReviewErik
According to Luciano Lamonarca, founder of the Saint Pio Foundation, it is very fitting for a veterans’ organization to receive help in the name of St. Pio of Pietrelcina, popularly known as “Padre Pio.”

“A lot of people do not know it, but the connection between Padre Pio and the military is very strong,” he said, noting that soldiers met him in droves during World War II.

Many returned to visit the stigmatic after the war “because they were touched by his soul,” Lamonarca added.

A $20,000 donation to the Veterans Administration Maryland Health Care System by the Saint Pio Foundation will continue that relationship.

He presented an oversized check with the Saint Pio Foundation logo, which includes a likeness of the saint himself.

“He’s giving back to those who made him popular and were touched by his soul,” Lamonarca said.

The donation will specifically support the homeless veterans who utilize the medical center’s recently-completed Community Resource and Referral Center.

“It’s a one-stop shop – a lot of our community partners are located there,” said Chris Buser, chief of social work for the VA Maryland Health Care System.

Those partners include, among others, Project PLASE, which supports the homeless; Easter Seals, offering help for those with disabilities; and Maryland Commitment to Veterans, which assists with transportation.

The first floor of the facility, located at 209 W. Fayette St., a few blocks from the medical center, includes a self-service laundry facility, lockers, showers, and a “bedbug oven,” which kills the pests by heating clothing and other items on which they live.

On the second floor clients can obtain the services of social workers, a nurse practitioner and mental health professionals.

“The majority of people we’re dealing with have mental health or substance abuse issues,” said Tony Gibson, program manager for the Community Resource and Referral Center.

The second-floor also includes a teaching kitchen and all-purpose room.

“The goal is to provide cooking classes to teach veterans how to make healthy meals,” Gibson said. “We also hope to have certification classes to help veterans get employment.”

The Saint Pio Foundation connected to veterans’ causes through its two award winners for 2016. Actor Gary Sinise, known for his work on behalf of veterans, and the Hon. Robert “Jim” Nicholson, former U.S. Secretary of Veterans Affairs, will be honored at the second annual Saint Pio Award Ceremony May 27 in Washington.

Lamonarca, a native of Italy’s Puglia region – the location of St. Pio’s Our Lady of Grace Capuchin Friary – said his devotion to the modern mystic “started in my genes and grew.”

As his career as an opera singer (tenor) took off, Lamonarca was approached by groups of devotees to St. Pio who wished to further promote the saint through charitable work. Lamonarca said he accommodated their requests, partly to “give honor to God for the great career I am having.”

Eventually, he started his own foundation, which has benefitted St. Pio’s religious order, the Capuchin Franciscans, as well as the hospital the saint helped found, the Home for Relief of the Suffering in San Giovanni Rotondo, Italy.

“We have several actors who support us, as well as bishops and cardinals, and other people I have been fortunate enough to meet in my career,” Lamonarca said.

Serving on the Saint Pio Foundation’s Religious Advisory Board is Cardinal Edwin F. O’Brien, archbishop emeritus of Baltimore and grand master of the Equestrian Order of the Holy Sepulcher of Jerusalem.

“He is an outstanding supporter,” Lamonarca said, adding that he hopes to hold a foundation event in Baltimore in the near future.

“I think it is fantastic that this is taking place,” he said of the donation, noting the fact that St. Pio had served in the Italian army’s medical corps during World War I.

“My three aunts who were nuns would smack me for not knowing that,” Buser joked.

Five Things to Know about the Chrism Mass