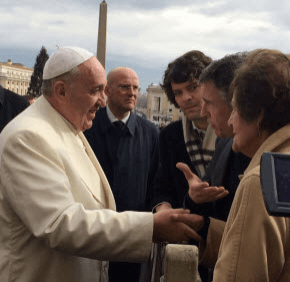 By Penny Wiegert
Catholic News Service
ROCKFORD, Ill. – Several Boylan Central Catholic High School alums are seeking “to help a mom know her son.”
After all, Boylan is more than a community. Lynn Perez-Hewitt (class of 1971) says it’s smaller than that.
“It really is a tight connection, a family,” she said.
And families stick together. Families help each other.
In this case, the “mom” they are reaching out to is the woman upon whom the Oscar-nominated movie “Philomena” is based. The “son” is Michael Hess, Boylan class of 1970. The idea to reach out to Philomena Lee was hatched long before any of Hess’ former classmates ever heard about a movie. Their goal had everything to do with fond memories of Mike as a good, faithful and talented friend.
About a year ago Lynn Cuppini McConville, Boylan’s director of advancement, was asked if she knew about the book “The Lost Child of Philomena Lee” by BBC correspondent Martin Sixsmith. It was brought to her attention by Boylan staff member Ingrid Jansen. Jansen’s sister-in-law lives in Ireland, happened to read the book, and was surprised to see Rockford mentioned.
McConville said she checked it out and couldn’t believe that the lost son mentioned in the book was Hess, a fellow classmate and friend who she remembers as being “such a nice and intense young man.”
She said she was hesitant at first because the story highlights harsh attitudes and an unattractive chapter in church history.
Lee gave birth at a convent home in Ireland for unwed mothers. Once her son was born, like other young mothers, she was forced to “relinquish full claim forever” for her son so that he could be adopted. She also had to work in the attached laundry to pay off the debt she owed the nuns.
It was the fond memories of a “wonderfully talented and kind person” that compelled McConville to email and Facebook several of her fellow alumni about the book and its Boylan connection. And so they began to reminisce about days gone by.
One classmate, Jeanne Harris Nutter, class of 1970, suggested contacting Lee to “fill in the gaps” of her son’s life. Then when the classmates learned of a movie coming out based on the 2009 book, they began contacting other Boylan graduates that have connections to New York, Washington and even the Vatican.
“Jeanne called me and asked if I heard about the movie ‘Philomena.’ I said I heard about it but haven’t seen it,” Perez- Hewitt said, explaining that in her town it only played for a week or two.
“Well,” Jeanne said, “it’s about our Michael! I couldn’t believe it.”
The two shared a flood of memories about Hess. Then Harris Nutter suggested the classmates gather their memories and pictures and find a way to reach out to Lee and help “a mom get to know her son.”
Lee’s child, Anthony, was adopted at age 3, along with a girl named Mary, by Dr. A. Michael Hess, a successful urologist, and his wife, Marjorie Lane Hess.
Anthony was renamed Michael and he and Mary lived with the Hesses and their three biological sons in Iowa, St. Louis, Illinois and then Rockford. After Michael and Mary Hess graduated from Boylan, the Hesses moved to Florida, where Mary still resides. Michael Hess died in 1995.
“I just remember Michael being so charismatic and it was just natural for him. And he was kind and so handsome; I had a mad crush on him,” Perez-Hewitt told The Observer, newspaper of the Rockford Diocese. “I was running for student council and we had the campaign meetings at his house. He was so engaged in life and was just a kind human being and we want to share that with Philomena.”
She has been part of the International Rotary Organization, so she made some connections in England and Ireland to contact Lee.
Harris Nutter went to grade school with Hess. She said she didn’t recall if Mike ever talked about being adopted.
Her own career as a social worker, which included working with special-needs adoption and children in foster care, led her to try to reach out to Lee.
“I understand the struggle they both went through in their search for each other,” said Harris Nutter. “I understand the pain of giving up a child for adoption, either voluntarily or involuntarily. It is not easy. … It is life changing and tragic.”
Harris Nutter said she and her fellow Boylan alums have stories “to share with Philomena and photos and maybe other tangible pieces of Michael that she can have to fill the piece of her heart that has been missing for 50 some years.”
Whether the Boylan connection to Philomena Lee goes full circle, the Boylan family as Perez-Hewitt called it, is stronger for the memories.
The alums now have a website to share those memories and photos: www.photosforphilomena.com.
Wiegert is editor of The Observer, newspaper of the Rockford Diocese.
Also see:
Who needs Oscar? Here’s our list of 10 pictures and family films
Pope Francis’ 10 most quotable quotes of the year
Copyright (c) 2014 Catholic News Service/U.S. Conference of Catholic Bishops
PrevNext