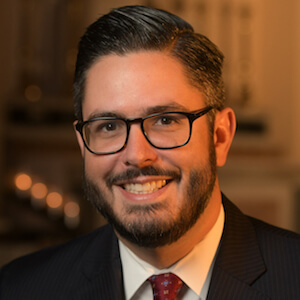 Edward was appointed the Executive Director for the Archdiocese of Baltimore’s Institute for Evangelization in 2021. Previously, Edward was the Director for the Office of Marriage and Family Life.  In this role, he has worked with parishes to best accompany couples as they prepare for the Sacrament of Marriage. Before moving to Baltimore, Edward worked at a large parish in the Archdiocese of Galveston-Houston and also served as Director of the Rev. William J. Young Social Justice Institute.  Edward completed undergraduate studies in Theology and Catholic Studies at the University of St. Thomas (Houston) and graduate studies at the Pontifical John Paul II Institute at the Catholic University of America.  He holds a certificate in Catholic Innovation from the University of Notre Dame’s IDEA Center.  Edward lives in Parkville with his wife, Joanna, and their five children, Max, Lucy, Grace, Leo, and Teresa.  They are parishioners at St. Ursula.