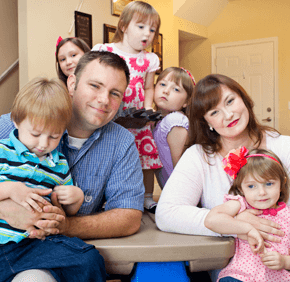 By Maria Wiering
mwiering@CatholicReview.org
Jason and Joanne Doctor’s conversations usually default to their children, schedules or finances, but on a recent Friday night, those topics were off-limits. Instead, they took nearly two hours to talk about their 10-year-old marriage and reminisce about when they first met.
They were among the 60 couples who attended the first of six date nights for married couples Sept. 12, a program of St. Augustine in Elkridge and Church of the Ascension in Halethorpe to encourage couples to reflect to on their vocation.
Held at St. Augustine, the event included prayer and a short video on a marriage-related theme before couples went out for dinner alone, armed with theme-related questions.
This date’s theme was “Remember When” – an opportunity for couples to recall how they met and fell in love.
Ascension and St. Augustine – who share a pastor and some staff members – are among several parishes in the Archdiocese of Baltimore that recently have added events or ministries focused on strengthening marriages.
Like Ascension and St. Augustine, St. Jane Frances de Chantal in Pasadena is in the middle of a “six dates” series. St. Ignatius of Loyola in Ijamesville holds dinner and movie nights. Holy Trinity in Glen Burnie offers a couples’ enrichment group for Spanish speakers. Our Lady of Perpetual Help in Ellicott City is holding a two-day marriage seminar in October, and the archdiocese is sponsoring a marriage weekend at St. Margaret, Bel Air, Oct. 25.
Several parishes in the archdiocese, including St. Benedict in Baltimore, have also hosted events through Catholic Hearts Espoused Rejoice in Sacramental Hope (CHERISH), a marriage-boosting program Catholics in Hagerstown launched in 2011.
St. Augustine and Ascension’s ministry began a year ago, and draws on materials from John and Teri Bosio, authors of “Happy Together: The Catholic Blueprint for a Loving Marriage” (Twenty-Third Publications, 2008), which the couples receive. The “Six Dates” program is based on the Bosios’ book.
The parish events coincide with the archdiocese’s Marriage Matters initiative, which promotes Christian marriage with resources on marriage preparation and enrichment. It also offers help for Catholics who are divorced or seeking annulments.
Catholic couples need encouragement, said Lauri Przybysz, the archdiocese’s coordinator of marriage and family life.
“It used to be that people knew a lot of happily married couples, but now days it’s important to have some intentional support,” she said. “We might have thought marriage is taking care of itself, but it’s not. People are struggling. To believe in marriage these days is not a given.”
Przybysz thinks night events and other programs that celebrate marriages are more attractive and effective than programs marketed to help couples “work on” their marriage. The latter, she said, sounds daunting.
Cathy Carlin, Ascension and St. Auggggustine’s religious education coordinator, said she hopes attendees recognize the importance of taking time to focus on their marriage. She also hopes the ministry builds community and fostered interest in parish life.
Joanne Doctor, 33, called the date “a tremendous blessing.”
“It was a great catalyst for conversation about things we hadn’t talked about in quite awhile,” she said. “It  felt like it was just me and him, like when we first met each other.”
She and Jason rarely go on dates; finding affordable childcare for their five children, ages 2-9, is a deterrent. St. Augustine offered free childcare for two hours during the event to allow couples to attend the program and have dinner alone.
Carlin knew child care was key for many couples who wanted to attend. The parish asked $35 per couple for the six-date series; child care was available for no extra cost.
Even couples without children or with older children often neglect date nights, Carlin said. She hopes the date nights “catch” both families with young children and empty nesters.
Parishes should offer marriage ministries because marriage is a sacrament, Carlin added.
“If we’re going to ask people to make a vow, we need to do whatever we can to support them, to make that something they can do,” she said. “Obviously, God’s grace is at work there, but part of God’s grace is also at work through the parish.”
Mass for married couples
The archdiocese is holding its annual Anniversary Mass Sept. 28 at 11 a.m. at the Cathedral of Mary Our Queen in Homeland. Archbishop William E. Lori is expected to celebrate. The Mass is open to all, but organizers especially encourage couples celebrating 1, 5, 10, 20, 25 or 50 or more married years to attend. Couples are encouraged to register in advance; those who do will receive a certificate from the archbishop. Visit marriagemattersbalt.org or call 410-547-5406 for more information.
PrevNext