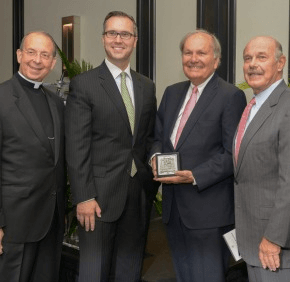 Columbia University senior Keith Williams, who spent his grammar school years at the former Father Charles Hall School in Baltimore, joked that he has often felt like “a walking billboard for ‘Low-income young black kid does good.’ ”

In his keynote remarks at the 2015 Back-to-School Breakfast in celebration of the Archdiocese of Baltimore Partners in Excellence Scholarship Program, however, Williams credited his Catholic education with helping him to be a billboard for something beyond himself.

“It’s not about what you do in life – it’s how you do it,” Williams opined, noting that volunteering at a local soup kitchen and teaching “Harlem kids about fighting fair with words and not with their fists” were among the more rewarding things he had accomplished at Columbia, outside of personal academic success.

The breakfast, held Sept. 9 at the Baltimore Waterfront Marriott, celebrated Partners in Excellence (PIE) while encouraging those movers and shakers present to step up their support and advocacy of the program.

No real pies flew the air, though attendees several times referenced the PIE Challenge, a social media campaign in which participants take a pie to the face and donate $28 to PIE. Twenty-eight dollars is the cost of educating one student for one day through PIE, which helps low-income city children attend Catholic schools.

This school year, according to Thomas Kurowski, chairman of PIE’s board of advisors, $1.2 million in scholarship funds has been provided to more than 600 students at archdiocese schools, including Archbishop Borders School, Cardinal Shehan School, Holy Angels Catholic School and Ss. James and John Catholic School, all pre-K-8 community schools as well as Archbishop Curley High School and The Seton Keough High School, all in Baltimore.

Kurowski touted the achievements of PIE students, 86 percent of whom go on to a Catholic, private or city-wide high school, and 66 percent of whom graduate from college within five years. PIE scholars live in households earning a median income of $27,000, 36 percent below the city household median of $42,000.

Michael Batza Jr., 2015 winner of the St. Thomas Aquinas Partners in Excellence Award, referenced the immense growth of the PIE program since it was founded in 1996 by Cardinal William H. Keeler, archbishop emeritus of Baltimore.

“I know Cardinal Keeler would be very, very, very proud of the Partners in Excellence Program as it stands today,” said Batza, chairman and CEO of Heritage Properties and a prominent business leader who, with his wife, Pattie, has funded approximately 500 PIE scholarships.

“Given the issues our city faces post-Freddie Gray and the riots, the Partners in Excellence program and scholarship efforts become more important to keeping hope and making a difference in the lives of city kids,” Batza said.

His remarks were echoed by Archbishop William E. Lori, who spoke about his April 28 visit to West Baltimore, the morning after the unrest, with Auxiliary Bishop Denis J. Madden.

“I left that little tour that morning not only with a greater understanding of the hopelessness so many face, but also with a renewed determination to do everything we can as a faith community to make things better – especially for the children,” the archbishop said.

“I always say that the schools are indeed one of the most transformative things we do as a faith community and as partners together,” he added, noting that Catholic schools “(raise) up those young people who will make a difference in our society.”

“None of this would be possible without Partners in Excellence,” Archbishop Lori concluded. “It’s not just a catchy name.”