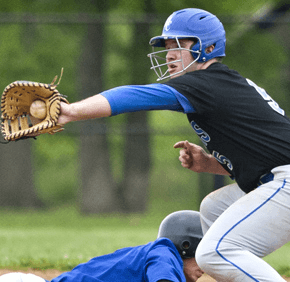 By Elizabeth Lowe
elowe@catholicreview.org
Twitter: @ReviewLowe
ESSEX – Tyler Naunton works hard on the athletic field and even harder in the classroom.
A junior at Our Lady of Mount Carmel School, he plays varsity soccer and baseball while maintaining a 4.3 grade point average. He is the goalie in soccer and first baseman in baseball, both of which he has played since about age 4.
“I always, when I was little, would play (sports) in the backyard with my friends and dad,” Naunton said.
The 17-year-old from Rosedale played basketball for the Cougars as a sophomore, and also plays soccer year-round for a local travel team. He has soccer practice two or three times each week for there, and every day after school for the school’s soccer and baseball teams when they are in season.
Naunton likes soccer more and spends more time practicing it.
“But I’m a hard worker,” said Naunton.
A parishioner of Our Lady of Mount Carmel, he is the son of Mike Naunton, the school’s athletic director and baseball coach.
Naunton wants to play soccer in college and major in athletic training or sports management. A veteran of honors and Advanced Placement courses, he is enrolled in the Community College of Baltimore County’s parallel enrollment program, in which CCBC professor comes to Our Lady of Mount Carmel and teaches college-level courses.
This school year he took one English and two math classes through the program and next year he plans to take one math and possibly one English class. He will likely graduate from high school with at least six college credits.
Naunton participates in other school organizations, beyond sports. As a freshman and sophomore, he was a Student Government Association class representative. This year he was the SGA treasurer and was elected as the SGA’s student body president for next school year.
He does not yet have specific plans as student body president, other than to “make (school) a fun place to be for all students.”
A member of the National Honor Society, Naunton is involved with the school’s campus ministry program. He has attended and led retreats and helped plan prayer services and Masses, which Naunton said have strengthened his faith.
“Being able to see kids my age who weren’t afraid to share their faith with other people really opened up my faith to what it is today,” Naunton said.
Since ninth grade, Naunton said his faith has grown and is “a big factor” in his life.
“Growing up I saw people around me being involved (in church activities) and I caught interest and I wanted to be involved,” he said.
Naunton, who plans to get involved with campus ministry in college, is a member of the archdiocese’s Youth Advisory Council, 60 youths who meet monthly to plan youth-centric events, including archdiocesan retreats. The school’s campus minister nominated him for the role, he said.
“It’s a good chance to meet other kids,” Naunton said, “to get involved in other things than just school.”
Tyler Naunton
Our Lady of Mount Carmel
Junior
Credentials: 4.3 GPA; National Honor Society member, president elect of Student Government Association and campus minister’ plays varsity soccer and baseball.
Copyright (c) June 2, 2012 CatholicReview.org
PrevNext