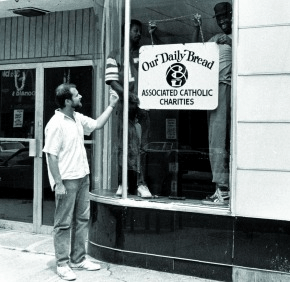 “It’s said that great things begin in small ways,” Baltimore Archbishop William E. Lori said, recalling the start of Our Daily Bread, when Monsignor Paul L. Love – who died in 1993 – and some religious sisters handed out sandwiches from the rectory of the Basilica of the National Shrine of the Assumption of the Blessed Virgin Mary in Baltimore more than three decades ago.

“Look where we are now,” the archbishop continued at a June 1 interfaith service of prayer and thanksgiving, celebrated at the same basilica in commemoration of the 35th anniversary of Our Daily Bread, which has served more than 7 million meals.

While their impact is indisputable, neither Monsignor Love’s sandwiches nor Our Daily Bread’s hot meals have eradicated world hunger or social injustice, but that’s not really the point, according to a prayer offered by Mary Anne O’Donnell, assistant director and chief administrative officer of Catholic Charities, which operates Our Daily Bread at 725 Fallsway.

Archbishop William E. Lori is joined by Baltimore City faith leaders for an interfaith prayer service at the Basilica of the National Shrine of the Assumption of the Blessed Virgin Mary honoring the works of Our Daily Bread June 1. (Kevin J. Parks/CR Staff)

“Nothing we do is complete, which is a way of saying that the Kingdom always lies beyond us,” O’Donnell intoned, offering a prayer often attributed to Blessed Oscar Romero, though it was composed, according to the U.S. Conference of Catholic Bishops, by Bishop Kenneth E. Untener, who served as bishop of the Diocese of Saginaw, Mich., from 1980 until his death in 2004.

“It may be incomplete, but it is a beginning, a step along the way, an opportunity for the Lord’s grace to enter and do the rest,” O’Donnell continued. “We may never see the end result, but that is the difference between the master builder and the worker.”

That’s the way Our Daily Bread volunteers look at it.

“I do it for the glory of God and to be able to help someone that’s less fortunate,” said Orangee James, who has served Our Daily Bread clients since 1994. “I love interacting with the clients – they have stories to tell, and they’re just looking for a smile and somebody to talk with.”

Carol Wallace, a parishioner of St. Pius X in Rodgers Forge, has been a volunteer with Our Daily Bread since it began in June 1981.

“Our parish got a letter from (Sister Josanna Abromaitis of the School Sisters of Notre Dame, founding director) about a new soup kitchen,” Wallace, who did not attend the service, told the Catholic Review. “We were asked if anybody was interested in calling Sister Josanna back. It sounded O.K. to me.”

“I got started, and I felt the work fit me,” she said. “I like that it’s so direct. Food is made in homes, stored, heated and served to people. That’s very concrete.”

There’s a spiritual effect as well, as faith leaders attested at the prayer service.

The Rev. James Green, minister of congregational care at the New Psalmist Baptist Church in Baltimore and a former program director of Our Daily Bread, noted that the service operates under the Catholic Charities mantra to “cherish the divine within.”

“You all as an organization have … fed lambs until they become sheep,” Rev. Green said. “You have suffered long with individuals until they can get up and go and fish for themselves.”

Since its founding, Our Daily Bread has inspired the creation of service institutions that go beyond a hot meal.

Christopher Place Employment Academy, which started as an emergency shelter, is a residential educational program through which formerly homeless men go on to obtain employment and housing.

Our Back Pages: Our Daily Bread opened its doors 35 years ago