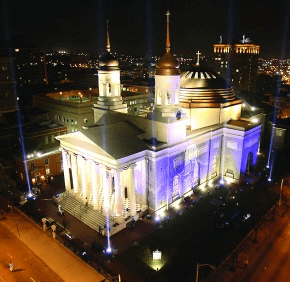 Cardinal William H. Keeler’s dream of restoring the Basilica of the National Shrine of the Assumption of the Blessed Virgin Mary in Baltimore to the vision of Archbishop John Carroll and the building’s original architect became a reality a decade ago when workers completed a painstaking two-year restoration effort.
The accomplishment was cause for a national celebration as Catholic leaders from across the country – and around the world – descended on Baltimore Nov. 4-12, 2006, for the rededication of a building whose cornerstone had been laid 200 years earlier.
The first Catholic cathedral erected in the United States was designed by Benjamin Henry Latrobe, the 19th- century master architect who also designed the U.S. Capitol.
The basilica’s 24 dome skylights, which had long been closed, were reopened during the restoration – flooding the interior with a mysterious, indirect natural light symbolic of religious freedom. Stained-glass windows that had been installed in the 20th century were relocated to a new church at St. Louis, Clarksville, to make way for clear glass panes.
In addition to updating the basilica’s infrastructure, long-lost statues of angels were recovered and restored. The interior was repainted, white marble floors and white pews were installed, the organ was restored, artwork representing the evangelists was uncovered and restored, the sanctuary was returned to the way it looked in the 19th century, and statues of St. John Paul II and St. Teresa of Kolkata were introduced.
A new chapel dedicated to Our Lady, Seat of Wisdom, was created in the basilica’s undercroft and the building’s exterior was illuminated at night.
More than 240 bishops from across the country processed into the basilica for a special Nov. 12 Mass marking the completion of the $32 million restoration project. Cardinal J. Francis Stafford, special envoy of Pope Benedict XVI and a former auxiliary bishop of Baltimore, served as the main celebrant for the Mass, predicting that pilgrims would be “dazzled” when they come to worship at the  rejuvenated basilica.
“This place will draw pilgrims out of themselves in ecstasy,” he said.
As part of the weeklong celebration, special concerts were held, tours were given and an interfaith prayer service was offered. Bells simultaneously rang out in Baltimore and France during a Nov. 10 trans-Atlantic celebration of the special connection France has with the basilica. (French features in the neoclassical building include the bells in the twin towers, which were cast in France, and oil paintings that were completed in France.)
“We know that there’s no other place on earth like the basilica,” said Cardinal Keeler, who had sought and received the personal blessing of St. John Paul II for the restoration project.

Read more from “Our Back Pages” here.