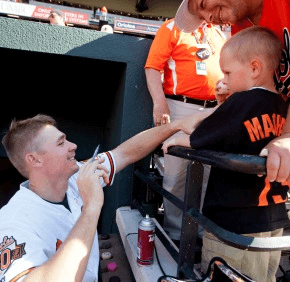 By Jennifer Williams
jwilliams@CatholicReview.org
When Steve Clevenger was a teenager attending Mount St. Joseph High School in Irvington, he wanted to get behind the plate and catch, but his coach, David Norton, needed him at shortstop.
Fast forward 10 or so years, and the Baltimore native, now 28, is not only catching, but he’s doing it for his hometown Baltimore Orioles.
“Not even when I was playing for the Chicago Cubs did I ever think I would get the chance to come here,” said Clevenger, as he relaxed in the Orioles dugout before facing the Detroit Tigers in game two of the series May 13.
Clevenger is starting for the Orioles while two-time Gold Glove Award winner Matt Wieters recuperates from an elbow injury.
“It’s just a dream come true and something I will always cherish,” said Clevenger, his steel blue eyes squinting in the sun and a grin spreading across his face.
A shining moment for the “Pride of Pigtown,” as he has been affectionately dubbed by fans, came in the May 10 game against the Houston Astros, when Clevenger hit a one-out double in extra innings to give the Orioles a walk-off, 5-4 win. That feat earned him a Boston cream pie to the face delivered by a gleeful Adam Jones.
“It’s something you dream about when you’re a kid,” Clevenger said. “I used to come to the ballgames and I would think to myself, it’d be so cool to get a walk-off hit like you see guys doing. And it’s a reality now.”
Clevenger attributes part of his success to his high school coach, who recently retired with 31 seasons under his belt.
“We keep in touch all the time and we’re going to continue that relationship,” Clevenger said. “He’s a big part of why I’m here today. He means a lot to me.”
Norton described Clevenger as a leader.
“He was the player who I relied on as his coach that while on the field, the players understand what they need to do,” Norton said. “I can’t say our relationship was perfect … we had our disagreements. But we worked through all those things. That’s why we have such a great relationship.”
Clevenger worked very hard for everything he had, Norton said, both in the classroom and on the field.
“You have to have talent, but you also have to have a strong work ethic to get to the major leagues,” Norton said. “Every time he goes out on the field, he will give the Orioles his very best because that’s the type of person he is and the type of player he is.”
Norton said when he and his wife watch the games, he is so proud. “I feel like a step-father to him. I take so much pride in what he does.”
Off the field, Clevenger enjoys fishing and hunting and spending time with his wife, whom he married in November.
The player, #45, whose mom and stepdad attend as many home games as they can, spends 10-12 hours a day at Camden Yards.
“I work hard,” he said. “I try to do what I can to make myself better and make this ball club better. I don’t take the big league life for granted by any means. You could be here one day and out the door the next. Not a lot of people get to go out the way they want to go out – like Cal Ripken.”
Clevenger said he’s always picked Wieters’ brain and appreciates the catcher’s help.
“He’s the beating heart of this team,” Clevenger said. “It’s a big hit to our line not to have him here and I’m going to do the best I can to fill in.”
When asked if he had any advice for Mount St. Joseph students, Clevenger had this to say:
“Leave life open. You never know what’s going to happen. Just work hard and don’t be that guy who complains. Be the guy who does something every day … comes into work every day or whatever you’re doing … to find something positive out of it. A lot of people complain and complain and complain. That’s the way you shouldn’t look at life. You should look at the opportunities God gives you and go from there.”
Sports trivia: Mount St. Joseph alumni playing for major sports organizations
NFL
Kyle Fuller ’10 – Chicago Bears
MLS
Jalen Robinson ’12 – DC United
MLB
Steve Clevenger ’04 – Baltimore Orioles
Gavin Floyd ’01 – Atlanta Braves
Mark Teixeira ’98 – New York Yankees
MLL
Brendan Mundorf ’02 – Chesapeake Bayhawks
NBA
Henry Sims ’08 – Philadelphia 76ers
Related articles:
Mount St. Joseph follows seniors to third straight BCL title
Baltimore league players team up with Catholic Charities
Inside Sports: Mount St. Joseph hockey goes the distance
Renaissance Man: Mount St. Joseph math, history ace also promotes mental health
Mission BBQ owners share the passion behind their business
Also see:
Hud rep: Catholic Charities’ new housing heeds Pope Francis
‘Inspiring’ deaf priest leads first-of-its-kind pilgrimage in Archdiocese of Baltimore