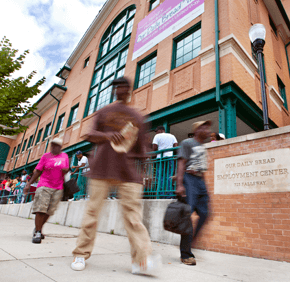 This is the first in a four-part series examining election-related issues.

In January, Trish Hampton was living in a three-story townhouse in Prince George’s County, but by April, the only thing between her and homelessness was a friend’s futon.

“I basically went from a mortgage to hand-to-mouth,” she said.

After the recession began, the faith-based nonprofit Hampton directed in Washington, D.C., lost funding, and she lost her salary. Earlier this year, she separated from her husband and left the house they had built together.

Hampton, 48, moved to Baltimore in February hoping “to reinvent herself,” she said. With her education degree and administrative experience, she expected finding a job wouldn’t be difficult.

Hampton is part of the “new poor” – people whose lives tipped over the edge after the economy downturned in 2007.

The economy isn’t explicitly on the November ballot, but campaign banter suggests it might as well be. For Catholics, the vote means more than new fiscal policies’ impact on pocketbooks and bottom lines. It is part of a moral obligation to care for the poor, and confronts the vexing question of how that is best done.

For charities, funding wanes as need waxes. As both the federal government and benevolent Americans debate whether to tighten or loosen the purse strings, charities cope with a tenuous forecast.

Maryland’s Catholic bishops called attention to the plight of the poor in “When Did We See You Hungry?”, a statement released as members of Maryland’s General Assembly convened in Annapolis for the 2012 legislative session.

“Loving those among us who are struggling, poor, unemployed or homeless is not merely something that we do out of the goodness of our own hearts,” they wrote. “Rather, it is an obligation and a requirement of true justice.”

Catholic social teachings have been thrust into a national spotlight this year as religious sisters embarked on a 15-day, nine-state bus campaign against a Republican-backed budget authored by U.S. House Budget Committee Chairman – and now vice presidential nominee – Paul Ryan, a congressman from Wisconsin. The sisters charged that the budget, if enacted, would hurt the nation’s poor.

Ryan, a Catholic, has said his budget is framed by his understanding of Catholic social principles, including subsidiarity, a tenet Maryland’s bishops addressed in their January statement.

“The concept of subsidiarity – the principle of Catholic social teaching that individuals bear primary responsibility for attending to duties they can perform themselves – instructs that we cannot wash our hands of the work of caring for the poor by simply asking the government to do it,” they wrote. “However, the government has a crucial role to play; and part of our responsibility is to be sure that our leaders take action when they must.”

Archbishop William E. Lori of Baltimore last week told the Catholic Review that “government has an important role to play in issues of economic justice,” but that it does not act alone.

The fact is, many charitable programs lean heavily on government funding.

According to its annual report, Catholic Charities spent $128 million in operating expenses last year; 77 percent of its $122 million operating revenue came from the government, while 10 percent was from contributions.

Most of the government funding Catholic Charities receives helps to fund its programs for seniors, people with disabilities, and children with severe emotional and behavioral problems. Its poverty-related programs are largely supported by charitable donations.

St. Vincent de Paul, a significantly smaller organization, spent about $15 million in operating expenses last year. It received about $16 million in support and revenue, 55 percent from government grants and contracts.

“Government at all levels relies upon Catholic Charities and other highly efficient and effective human services organizations to provide programs and services that meet the needs of vulnerable people that government is just not able to do,” Catholic Charities of Baltimore CEO William McCarthy Jr. said.

The question of how the government, mediating institutions and individuals should share their responsibilities to promote human flourishing, including assisting the poor, is now at the heart of the national debate.

As to the government’s role, “reasonable people may differ about the means and extent of these weighty and complex obligations,” Archbishop Lori said via email.

“(Government) must respect and work with ‘intermediate’ institutions – strong families which protect and provide for children, churches and charities, schools, volunteer organizations and the like,” he said.

He praised the assistance parishes provide to their communities, and said Catholics have a responsibility “to be men and women of charity to those in need.”

John Schiavone, president and chief executive officer of St. Vincent de Paul of Baltimore, said it is hard to plan ahead five years in an uncertain economy, and 10 is an impossible outlook.

The charitable organization lost some funding during the recession and never regained it, he said. Meanwhile, it has been working to address growing need.

“It’s been a very difficult time,” Schiavone said. “For people at the lowest end of the economic ladder, the impact is huge. They’re the ones who carry the brunt of the unemployment rate.”

As the United States faces its highest poverty rate in 50 years, one in four people live below the federal poverty threshold in Baltimore City.

Schiavone said poverty measures are outdated, as the annual cost of self-sufficient living is actually tens of thousands of dollars higher, and people struggle to get by working minimum-wage jobs.

“I don’t think people quite understand that,” he said. “I think people have a general sense that the recession is bad, that people have had to cut back. But this goes way beyond cutting back. This is a question of survival for a lot of people.”

Experts suggest the economy is recovering, but people in poverty are the last to feel the effects, he said.

Our Daily Bread and My Sister’s Place, which both serve meals, notice upswings in clients at the end of each month, when government-provided food supplement programs run out for the working poor, McCarthy said.

Meanwhile, clients’ needs have increased in complexity – they are not looking just for a meal, but also help paying utilities or health care expenses, he said.

Sarah’s Hope, a St. Vincent de Paul shelter for women and children in West Baltimore, turns away about five families each day. The organization’s Cottage Avenue Community provides transitional housing for 15 families, but 20 are on the waiting list. More young adults seek meals and help at Beans and Bread, its soup kitchen in Fells Point.

At Catholic Charities, McCarthy said he evaluates the work the organization does with one question: “If we stopped doing something tomorrow, who would do it?”

With Baltimore City facing an 11 percent unemployment rate, finding job seekers a living wage is the aim of Catholic Charities’ Work for Success, a weeklong program at its Our Daily Bread Employment Center.

Hampton participated in the program, and Catholic Charities hired her in June as Our Daily Bread’s front desk coordinator. It is an entry-level position, but Hampton hopes to work her way up. At $13.64 an hour, she is earning enough to rent her own place near Lake Montebello.