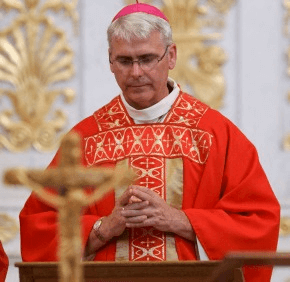 OKLAHOMA CITY – By ordering the removal of a Ten Commandments monument from the state Capitol grounds, the Oklahoma Supreme Court is ignoring the historical significance of the moral code “in the formation of our state,” said Archbishop Paul S. Coakley.

The justices in their 7-2 ruling also disregarded “the ancient law code having prominence at the place where lawmakers work to enact wise and just laws,” Oklahoma City’s archbishop said in a statement.

“The court’s dismissal of these established facts is deeply concerning and disappointing,” he added.

The state’s high court ruled June 30 that the Ten Commandments chiseled into the 6-foot-tall granite monument are “obviously religious in nature and are an integral part of the Jewish and Christian faiths” and therefore violated the state constitution.

The decision overturned a state district court that said the monument could stay. It was erected at a cost of $10,000, which was paid for by Republican state Rep. Mike Ritze and his family. The current monument was put up in January after the original statue was destroyed last fall when a driver crashed into it.

Attorney General Scott Pruitt said in a statement: “Quite simply, the Oklahoma Supreme Court got it wrong. The court completely ignored the profound historical impact of the Ten Commandments on the foundation of Western law.”

He said his office planned to file a petition with the court for a rehearing “in light of the broader implications of this ruling on other areas of state law. In the interim, enforcement of the court’s order cannot occur.”