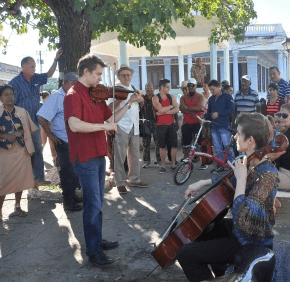 As headlines turned toward Pope Francis’ Feb. 12 arrival in Cuba, social scientist and arts enthusiast Charles Borowsky said that the pontiff should not be surprised to see his image “everywhere” in the island nation.

“He’s in high esteem,” said Borowsky, a parishioner of St. Dominic in Hamilton who recently returned from a goodwill tour of Cuba with his musical family, known as the American Virtuosi.

“We visited several homes, and a lot of people have memorabilia of him,” Borowsky added. “Francis is close to Cuba because of his closeness to the poor, and the role he played (in improving relations) between Cuba and the U.S.”

Bringing two parties together is never an easy task, but the Borowskys relish any opportunity to achieve that end via their favorite means – music.

“Music is a very powerful tool of personal and social development,” said Borowsky. “Like religion, good art can inspire people and provide vision.”

“We’ve been there not only when everyone has been going,” Borowsky said. He added that his family has always sought direct interaction with “the people,” which is possible, he said, “if you give up comfort.”

The most recent trip included Borowsky’s wife, Cecylia Barczyk, an acclaimed cellist as well as a professor at Towson University; and the couple’s children – pianist Elizabeth, 32; violinist Emmanuel, 27; and cellist Frances, 23.

The Borowsky family – including Charles on harmonica; his son, Emmanuel, on violin; and his wife, Cecylia Barczyk on cello – serenade Cubans during a two-week trip to the country in January. (Courtesy Intermuse Performing Artists Bureau)

Rather than follow the established tourist lines, the family opted to visit off-the-beaten-path churches and concert halls, playing original compositions as well special pieces selected to inspire, including “Amazing Grace,” with Borowsky acting as an organizer and master of ceremonies.

“It’s amazing how people reacted to it,” Borowsky said, adding that the family entered one church to find it festooned with Cuban and American flags.

“I don’t know how they got that past the local authorities,” he said.

Prior to their trip, the Borowskys had established contact with Cuban musicians and groups who were in need of instruments. Through pre-trip benefit concerts, the family raised $7,000 for the cause.

Borowsky said the family also participated in planning the renovation of a community center in Cumanayagua in Cienfuegos Province, which will be a space dedicated to music and education.

Borowsky said that he observed signs of a religious revival in Cuba, which recently – for the first time since the country’s communist revolution – allowed the construction of a new church.

“Now, the churches are being restored with help from foreign countries and other sources,” Borowsky said, adding that parishioners tend to be either old or young, and “nothing in between.”

Throughout the trip, the Borowskys embraced a give-and-take relationship with everyday Cubans, who often joined the family on stage to participate in their shows.

While he emphasized that “music is a bridge, not a slogan,” Borowsky mused that there is one slogan which “should be in our hearts and minds,” instead of, ironically, on money: “United we stand, and in God we trust.”

Cookies, sombrero and a shoe shine: Even reporters give pope gifts