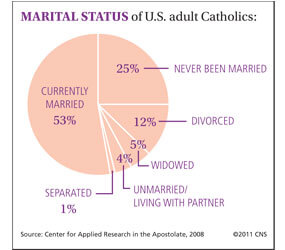 “Since 1972, the number of marriages celebrated in a Catholic church has fallen nearly 60 percent” in the U.S., said Sheila Garcia, associate director of the U.S. bishops’ Secretariat for Laity, Marriage, Family Life and Youth, citing a study conducted for the secretariat by the Center for Applied Research in the Apostolate at Georgetown University and released in 2008.

That trend is among the reasons that led the bishops to launch their National Pastoral Initiative for Marriage in 2004 and the related “For Your Marriage” website to help people better understand the Catholic viewpoint on marriage and to strengthen the bonds of couples, whether they are Catholic or not, married in the church or not.

“What we have said is that you need three things to support marriage – a vision, skills and a supportive community,” Garcia told Catholic News Service. “The church clearly offers a vision for marriage. We believe you can have a marriage that is faithful, permanent and open to children. We believe with God’s grace that can be achieved.”

Through practical articles on such topics as finance and communications, the website at http://foryourmarriage.org offers tools to help couples strengthen their marriages. A campaign involving television and radio spots, print ads and billboards works to communicate the message that “the church cares about marriage as an institution and cares about your marriage,” Garcia said. “You can turn to the church for support.”

The 2008 CARA report found that 53 percent of adult Catholics in the U.S. were married, 25 percent had never married, 12 percent were divorced, 5 percent widowed, 4 percent living with a partner and 1 percent separated from their spouse.

A new report from the Pew Research Center analyzing Census Bureau data offered similar statistics. It found that only 51 percent of Americans 18 and over were married in 2010, 28 percent had never been married, 14 percent were divorced or separated and 6 percent widowed. The Pew report did not include a figure for those living with a partner.

But the Pew study also found that 39 percent of the respondents said marriage was becoming obsolete – an opinion that Brian R. Barcaro said the vast majority of the 300,000 users of CatholicMatch.com would dispute. Barcaro co-founded CatholicMatch.com with two others in June of 1999 and said there have been “thousands and thousands” of marriages resulting from the service since then.

“Overall our members would not be very similar” to the average single person surveyed by Pew, Barcaro said. “Their attitudes would be much more positive toward marriage than in the Pew study.”

He said “98, 99 percent” of CatholicMatch.com members “come with the idea that they want to meet someone that could be a future spouse.” The remaining 1 or 2 percent just want a community experience that can provide “perspectives on living life as a single Catholic,” he added.

But Barcaro said “one of the myths” about single people today is that they are all “college-age kids, 20somethings.”

“We do have a number of members in that age group,” he said, “but the majority are in their very late 20s or 30s or 40s.” Many of them have found themselves 10 or 15 years out of college and discovered that “things did not happen the way I thought they would” in terms of finding a spouse, Barcaro said.

“If you don’t meet the love of your life in college, then you get into a job and career and that impacts your social circles,” he added. “In college there are lots of natural social circles, but afterward it becomes much more difficult.”