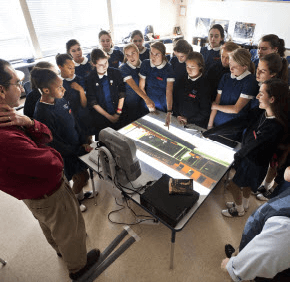 By Elizabeth Lowe
elowe@CatholicReview.org
Twitter: @ReviewLowe
TOWSON – For Maura Kelly, the difference between her attending or not attending Notre Dame Preparatory School boils down to financial aid.
“I probably wouldn’t be able to go here if it wasn’t for my scholarship,” said Kelly, a senior at NDP. “I’m very grateful for the opportunity. I love NDP.”
NDP launched “Honor Tradition, Value Change, Fund Her Future” Sept. 26.
According to a news release, the capital campaign, with a goal of $5 million, will increase tuition support and scholarships for students such as Kelly; assist the school’s science, technology, engineering, art and math (STEAM) and humanities programs; and increase NDP’s $10.6 million endowment.
“I love the (campaign) name because it captures what we’re trying to do,” said School Sister of Notre Dame Patricia McCarron, NDP’s headmistress. “We aren’t building a building, we are building opportunities.”
The campaign, which runs through June 2014, will benefit current and future students, Sister Patricia said.
Of the school’s 760 students, 257 are receiving scholarship and tuition support this school year, according to school officials. One-third of NDP students receive financial aid, an 8 percent increase since 2010.
Financial aid is renewed annually.
More than 80 individuals have already pledged or given nearly $3.6 million of the campaign goal, according to school officials.
Teachers in the STEAM and humanities programs welcome additional dollars for professional and curriculum development.
NDP’s humanities program, which takes an interdisciplinary approach, features two instructors from different departments who team teach discussion-style courses. There are currently 86 students enrolled in the program.
“The humanities program is changing the lives of the girls. I know that because they tell me,” said Rob Quinn, coordinator of the humanities program and an English teacher, who noted NDP graduates tell him how the program prepared them for college. “The proof is in the program.”
STEAM promotes an interest in science-related fields, which are traditionally male-dominated, said Patrick Cusick, coordinator the STEAM program and an engineering and physics teacher. The school’s 80 STEAM students engage in hands-on learning with technology that includes a 3D printer.
“It’s very expensive to run a STEAM program,” Cusick said, “and stay current with technology.”
“Both programs (humanities and STEAM) situate the girls to better see the paths before them,” Quinn said. “Our programs are showing them paths that may not be obvious to them in high school.  I believe our programs make them the women who are going out to transform the world.”
For more stories on Catholic education, click here.
Also see:
Two paws up: St. John, Westminster, couple own South Baltimore dog daycare
Hundreds gather at Lay Ecclesial Ministers convocation in Timonium
PrevNext