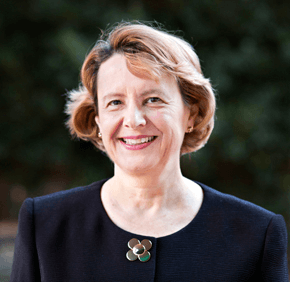 By Elizabeth Lowe
elowe@CatholicReview.org
Dr. Marylou Yam, who has 30 years of experience in Catholic higher education, was announced as Notre Dame of Maryland University’s 14th president March 20.
“To educate leaders who will transform the world is a powerful mission,” Yam told the Catholic Review. “I’ve always been an advocate for women in leadership roles and for empowering women. I believe in women’s colleges, that they offer exceptional leadership opportunities for women. They engage women.”
Yam was a pioneer at St. Peter’s University in Jersey City, N.J., where she was the first woman to serve as dean of its College of Arts and Sciences and School of Business Administration.
She joined the Catholic Jesuit liberal arts institution in 1989 as an instructor in the nursing department, and for the past six years served as its provost and vice president for academic affairs.
“I value what the Catholic liberal arts tradition brings to the campus,” Yam said. “It’s an environment that encourages our students to reflect, to pray, to participate in leadership and that’s the kind of community I want to be involved in.”
“Dr. Yam’s leadership experience in the development and delivery of leading-edge professional programs rooted in the liberal arts will serve Notre Dame well in the continued expansion of our four schools – Arts and Sciences, Education, Nursing and Pharmacy,” Patricia J. Mitchell, chairwoman of the university’s Board of Trustees and a Notre Dame alumna, said in a statement.
Yam, a Catholic, will assume leadership of the university July 1.
She succeeds Dr. Joan Develin Coley, president emerita of McDaniel College in Westminster, who has served in an interim capacity since last August. Coley replaced Dr. James F. Conneely, who served in the position for little more than a year. Conneely was the first male and second layperson to serve as president, succeeding Mary Pat Seurkamp.
“We’ve been blessed with Joan Coley’s leadership,” Yam said.
She was one of three finalists, all female, for the job.
A native of the Bronx, Yam is a registered nurse and a nationally recognized researcher on victims of domestic abuse.
She earned a bachelor’s degree in nursing from Mercy College in Dobbs Ferry, N.Y.; a master of arts and education degrees in nursing education from Teachers College, Columbia University in New York; and a Ph.D. in nursing science from Adelphi University in Garden City, N.Y.
Yam describes herself as a collaborative leader and consensus builder. At Notre Dame, she plans to begin a dialogue with campus constituents.
“What I want to do is to begin to work with the faculty, trustees, administration on creating our vision and creating our strategic plan for the next five years,” she said. “The strategic plan will give us direction in terms of program development, community partnerships, infrastructure, (and) growing enrollment. That plan, grounded in the (university’s) mission, will then be the direction for us.”
School Sister of Notre Dame Kathleen Cornell, the leader for the Atlantic-Midwest Province of the order that founded the university, said in a statement that “In Dr. Yam we have a leader with a longstanding commitment to Catholic liberal arts education and a proven record of achievement and leadership.”
For the past two years Yam has served on the board of consultors for Hudson Catholic Regional High School in Jersey City, N.J.
Her husband, David, is the cytology manager at Beth Israel Medical Center in Newark, N.J. Their son, Michael, 32, is a sports broadcast journalist and studio host with the Pac-12 Network, based in San Francisco.
Also see:
See tweets and talk from the ‘Francis Factor’ event that drew 3,000 to Loyola University
‘Francis Factor’:  What was the message of panelists? #Video #slideshow
St. Patrick Parade beats the snow – view a slideshow of 95 photos from the event
PrevNext