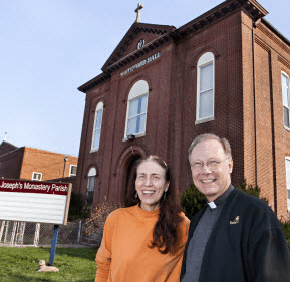 A Baltimore nonprofit that provides shelter for the homeless is one step closer to securing its new home, making use of a vacant Catholic school.

The Baltimore City Planning Commission voted unanimously at an April 5 zoning hearing for conditional use of the former parish school at St. Joseph Passionist Monastery Church in Irvington as a convalescent home, said Mary Slicher, executive director of Project PLASE (People Lacking Ample Shelter and Employment), a nonprofit that provides housing and supportive services to the homeless.

The building would house people with “some sort of disability,” Slicher said.

“The need is great,” said Slicher, who said Project PLASE has a waiting list with 500 people.

The nonprofit is working to transform the former school building on the grounds of the Irvington parish into 60 convalescent units and 30 permanent apartments and offices for the nonprofit, Slicher said.

“The buildings we are in (five throughout the city) are inadequate,” said Slicher, a parishioner of St. Joseph’s Passionist Monastery. “We want a better space to expand.”

The parish school, established in the 19th century, became St. Bernardine Catholic School in 1997 and was one of 13 schools closed in 2010 as part of the Archdiocese of Baltimore’s school consolidation. The building has been vacant since 2010, said Passionist Father William Murphy, pastor of St. Joseph’s Passionist Monastery.

Project PLASE offered the parish $1.42 million for the former school building and signed a contract with the parish and the archdiocese in November 2011, Slicher said.

Once Project PLASE obtains the special use variance within the current zoning, the sale can go through. The next hearing will be before a committee of the city council, Slicher said. A date has not yet been set.

“If you have the community support and you fit what’s allowable in different regions you should be able to get the zoning,” Slicher said.

Initially, in January 2011, Slicher said the project faced resistance from the community, which stalled the project. The nonprofit has since received support from residents in the Irvington and St. Joseph communities after going door-to-door, to neighborhood meetings and community forums, Slicher said.

“There’s a lot of people who have changed their opinion,” Slicher said.

Resistance, Slicher said, was the result of misinformation as to the type of facility and people who would be moving into the neighborhood.

Tim McCarthy, a parishioner of St. Joseph Passionist Monastery, estimates that parish volunteers knocked on about 500 doors in the community and more than 300 residents signed a petition in favor of the project.

“We did everything we could to win the neighbors over during a several-month period,” said McCarthy, 69, of Catonsville. “I always felt that if we could just get the truth out there to the people that opposed us, that they would come across.”

The project is “about rehabilitation, getting their lives back on track,” McCarthy said.

Karen Taylor, president of the St. Joseph’s Community Association, said she initially had “mixed feelings” about the proposed project but has changed her mind.

Project PLASE is “a great asset to the community,” said Taylor, 43. “It is a need. If people want to realize it or not, it is a need.”

Taylor said some community residents still have “mixed feelings” about the project, which Taylor suspects will change once Project PLASE moves into the community.

Father Murphy said the vacant building costs about $100,000 a year to maintain.

“We can’t maintain this building,” Father Murphy said. “We’d like it to advance the agenda of doing good.”

Slicher said she expects renovations to cost about $6 million.

“This is Mary’s vocation – social work,” Father Murphy said. “You can just see God’s grace working in that way.”