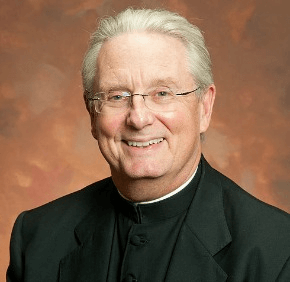 Appointed by the Provincial Council of the U.S. Province of the Society of St. Sulpice with the approval of Baltimore Archbishop William E. Lori as well as the Holy See, Father Brown takes the helm on the 225th anniversary of St. Mary’s Seminary and the Sulpician fathers in the U.S.

“St. Mary’s Seminary and University is blessed by the appointment of Father Phillip Brown, a skilled administrator and a dedicated priest who has able led Theological College these past five years,” said Archbishop Lori, chancellor and chairman of the Board of Trustees of St. Mary’s, in a statement.

In addition to a civil law degree, Father Brown holds a doctorate in Canon Law from the Pontifical Gregorian University in Rome. He was a faculty member of the School of Canon Law at The Catholic University from 2006 to 2010 and president of the Canon Law Society of America from 2012 to 2015.

Since 2009, Father Brown has served as general treasurer of the Society of St. Sulpice in Paris.

Founded by Sulpicians from France in 1791, St. Mary’s Seminary is the oldest Catholic seminary in the U.S.

Archbishop Lori said that, under Father Brown’s leadership, St. Mary’s is “poised to make unprecedented progress in attracting and preparing the next generation of priests to guide our Church and her people in the longstanding tradition of his Sulpician predecessors.”

Father Kemper said Father Hurst was responsible for significantly strengthening the priestly formation program of the seminary; he likewise saw a complete audit of the entire facility and reworked St. Mary’s approach to managing the school’s endowment.

“Tom has been an outstanding steward of resources at St. Mary’s Seminary and University and a good pastor to its students, faculty and staff,” Father Kemper said.

“I look forward to working closely with Father Brown for the good of St. Mary’s and give thanks to Father Thomas Hurst for his many years of service to St. Mary’s and to the Archdiocese of Baltimore,” Archbishop Lori said.

Pope marks third anniversary of election with talk on mercy