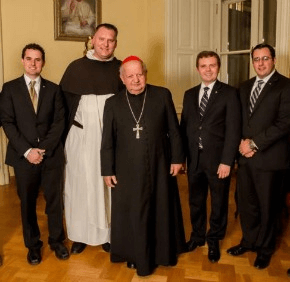 NEW YORK – There’s good news for Catholic viewers and all those with an interest in history: The compelling documentary “Liberating a Continent: John Paul II and the Fall of Communism” will be broadcast on PBS stations throughout the month of June (check local listings).
Produced by the Knights of Columbus, this is a fascinating 90-minute look at the crucial role the Polish pontiff played, both in public and behind the scenes, in bringing about the overthrow of Eastern Europe’s Marxist regimes. The film makes excellent use of archival footage and insights gleaned from interviews with heads of state, scholars, journalists, church leaders and St. John Paul II’s close personal acquaintances.
Narrator Jim Caveziel (“The Passion of the Christ”), shows how the future saint was shaped by history and heritage. We revisit the major influences on Karol Wojtyla: his devout parents and happy upbringing in a free Polish nation; the devastation of the Nazi invasion and World War II; life as an underground seminarian; and the crushing, demoralizing effects of Soviet-led communism on family life and faith.
As Archbishop Wojtyla of Krakow, the future pope was fearless in his defense of human rights and the reclaiming of Poland’s Catholic identity.
“There is no way that you could contest Soviet power by force,” explains professor Norman Davies, a leading expert on Polish history. “It had to be contested by spiritual power, and he did it.”
Following his election as pope in 1978, St. John Paul repeatedly proclaimed two characteristic messages: “Do not be afraid!” and “Open wide the doors to Christ!” Those exhortations kindled hope throughout the Soviet bloc while provoking dread in the Kremlin.
A pivotal moment came with the pontiff’s first return visit to Poland in June 1979. As the film recounts, his journey served as the inspiration for the birth of the Solidarity movement and for a wave of free thinking that spread like wildfire.
Nearly 40 years later, the saint’s words during his open-air Mass in Victory Square in Warsaw, Poland, still resonate: “I who am a son of the land of Poland and who am also Pope John Paul II, I cry from all the depths of this millennium, I cry on the vigil of Pentecost: ‘Let your Spirit descend and renew the face of the earth, the face of this land.’”
As papal biographer George Weigel notes, “What John Paul II inspired was a genuine revolution of conscience in Poland and indeed through Central and Eastern Europe in which people decided to live outside the confines of the communist culture of the time.”
“Liberating a Continent” is chock full of interesting facts. During the 1980 Summer Olympics, held in Moscow, the Soviets sent television antennae to every home in their satellite countries to encourage viewership. People discovered, however, that by adjusting the aerial they could pick up Polish television instead, and be inspired by the reforms sweeping that nation.
In 1981, we learn, John Paul wrote a personal letter to Soviet leader Leonid Brezhnev. Troops under Brezhnev’s command were assembling along the Polish border, and invasion fears were high. The pope did not receive a reply – but no attack took place, either.
The pope’s dealings with the other side in the Cold War were equally significant. He held a private meeting with Ronald Reagan, for instance, just six days before the U.S. president delivered his famous 1987 speech at the Berlin Wall.
Historians and journalists familiar with declassified KGB documents reveal the vast Soviet campaign to thwart John Paul’s moral crusade as well as the Soviet role in the failed attempt on his life in May 1981.
For more information on “Liberating a Continent: John Paul II and the Fall of Communism” or to purchase it on DVD, click here.