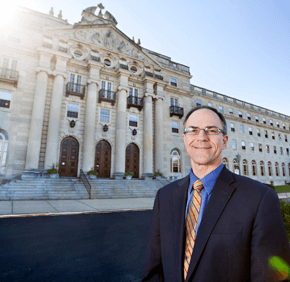 The Rev. Dr. Brent Laytham, the new dean of the Ecumenical Institute of Theology at St. Mary’s Seminary and University in Roland Park, is poised to make his mark on the institution.

“My work here is a ministry,” said Laytham, an ordained United Methodist elder.

Laytham was installed as dean Oct. 12.

His appointment was announced in March after a six-month national search, and began the job July 1. Laytham replaces Dr. Michael Gorman, who stepped down at the end of the 2011-12 academic year.

“With his experience in ecumenical relations from North Park, he will continue that dimension of the Ecumenical Institute and its outreach to all Christian and some non-Christian groups in the Baltimore area.”

Prior to St. Mary’s, Laytham was a professor of theology and ethics at North Park Theological Seminary in Chicago and the acting associate dean for academic operations.

He earned a master of divinity from Nazarene Theological Seminary in Kansas City, Mo. and a doctorate in religion from Duke University in Durham, N.C.

He is married and has two college-aged children.

“At the end of the 2000s, I developed a sense that I wanted to offer myself into academic administration,” Laytham said.

Founded in 1968, the Ecumenical Institute offers fully accredited master’s level courses and degrees in the evening and on Saturdays to men and women of all faith traditions.

It is “a vital and vibrant” place for Catholics and non-Catholics to learn, said Laytham, who added the institute is “the best kept secret in Baltimore. We want to get the word out that we exist.”

The past decade has seen a gradual decrease in enrollment, said Laytham, to fewer than 150 students at the institute. He wants to “turn our enrollment back around.”

To meet the needs of prospective and current students, Laytham wants to offer additional Saturday courses and intense, shorter courses. He wants “effective utilization” of online courses with a “limit of how far we want to go.”

Affordable tuition is also a priority, Laytham said. Each course is about $1,000.

“We cost less and provide more than our neighbor seminaries,” Laytham said. “We have to continue to work to build our endowment.”

Students range in age from 20s to 70s, and Laytham wants a more diverse student body.

Laytham hopes to “sustain the legacy and heritage that’s been handed to me.”

“I need to be a good conservator,” he said.

“Educating and forming men for the Roman Catholic priesthood is our primary mission and the Ecumenical Institute complements that mission,” Father Hurst said.

Read about a day in the life of a seminarian, instructor and non-Catholic at St. Mary’s Seminary and University and the Ecumenical Institute of Theology in Roland Park in the Nov. 15 Catholic Review.