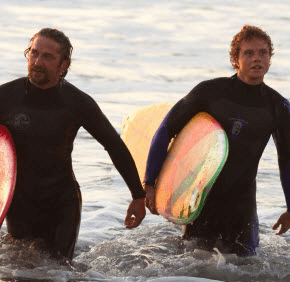 NEW YORK – Surf’s up – way, way up – in “Chasing Mavericks” (Fox), a thrilling action film about daredevil surfers who take on some of the biggest waves in the world, while rebuilding their own broken lives in the process.

The picture also offers viewers – particularly teens – a refreshingly positive role model in the person of a young man who, despite a mountain of obstacles, inspires others with his inherent sense of goodness, perseverance and self-discipline.

Jointly directed by Curtis Hansen and Michael Apted, “Chasing Mavericks” is based on the true story of Californian Jay Moriarity (Jonny Weston). At the tender age of 15, Jay attempted to surf the Mavericks, a famously formidable coastal spot located near the Golden State’s Half Moon Bay.

Jay is shown to have the weight of the world on his young shoulders. His father has moved out, and his depressed mother, Kristy (Elisabeth Shue), is a drunken mess. Summoning a maturity beyond his years, Jay must act as parent and breadwinner, sobering his mother up for job interviews while working overtime at a pizza parlor to make ends meet.

Compounding his problems is the situation at his high school, where he is bullied for being poor, and can’t seem to catch the eye of pretty schoolmate Kim (Leven Rambin).

And yet Jay keeps turning the other cheek and looking ahead, leaving his peers puzzled. “You always smile,” Kim tells him. “You only see the good in everything.”

What keeps Jay going – and makes others jealous – is his natural gift for surfing. The water transforms him in a baptismal way, fueling Jay’s desire to use his God-given talents for the betterment of others. Thus it’s no surprise that at one point we see him floating underwater, arms outstretched in a pose that suggests the role of a redeemer.

Jay finds a kindred spirit in his next-door neighbor, Frosty Hesson (Gerard Butler). He’s the ultimate surfer dude who has family issues of his own. His wife, Brenda (Abigail Spencer), prays that Frosty will eventually accept responsibility and become a better husband and father.

Frosty’s obsession with the Mavericks rubs off on Jay, and after much pestering, he agrees to train the teen in the art of big wave surfing. Frosty becomes Yoda to Jay’s Luke Skywalker, teaching him the “four pillars of a solid human foundation” – physical, mental, emotional and spiritual.

“Chasing Mavericks” features some spectacular cinematography, placing audiences on the surfboard and above and under the waves. Surfing becomes much more than a sport, as the duo learns to overcome fears, face grief, resolve conflicts, and rebuild relationships.

Not surprisingly, “Live like Jay” has become a popular motto among surfers; perhaps now it will catch on with moviegoers as well.

The film contains intense sports scenes and some emotionally challenging moments. The Catholic News Service classification is A-II – adults and adolescents. The Motion Picture Association of America rating is PG – parental guidance suggested. Some material may not be suitable for children.