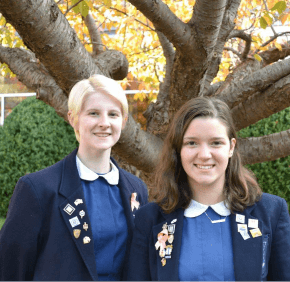 By Melody Simmons
Special to the Review
TOWSON – For a dozen years, two young women have forged a friendship. What started in a local Girl Scout meeting has led to top honors for their  community service projects, both of which were done for the betterment of Catholic Charities of Baltimore programs in Timonium.
Both Emily Keyser and Kaitlyn Jones are 17-year-old seniors at Notre Dame Preparatory School and parishioners of St. John the Evangelist in Hydes. They received the Gold Award, the highest award available in Girl Scouting, during a ceremony this fall.
They met as kindergarteners through Troop 1230, service unit 91, which serves northern Baltimore County.
Keyser organized a reading hub and library at the Gallagher Center, which serves adults with intellectual disabilities.
Jones planned, planted and built an outdoor meditation garden at St. Vincent’s Villa, a residential treatment center for youths and teens suffering from psychological trauma or developmental disorders.
The Gallagher library idea was born after Keyser volunteered there one summer and immediately noticed the need for entertainment options.
“They (the residents) deserve the same chance at entertainment and education that I get,” she said.
She set about collecting children’s books up to a third-grade level and creating a reading nook.
“It took me about one and a half years,” Keyser said. “I had to collect books and the shelving, I had to stain, seal and assemble the shelves and install them. That was a lot more manual labor than I was used to, so it took a while.”
Most of the books were donated from families who had “boxes sitting in their basements.” They included a set of classic Nancy Drew mystery novels donated from the mother of one of Keyser’s good friends.
“Everyone was willing to help me out with my project,” she said. “Girl Scouting has taught me that service is something that is a central part of everyone’s life. It has also taught me – especially with my Gold Award – how to be more independent, strong and do things and put plans into action and actually go through with them.”
Jones said she was shocked the time she saw the space at St. Vincent’s called “the Garden of Hopes and Wishes.”
“It was kind of a disaster, with overgrown vegetation everywhere, rose bushes climbing up the side of the building,” she said. “It looked like somewhere you would throw your trash.”
Other than helping her mother in the backyard, Jones said she had never launched a gardening project before. In the end, though, the project taught her much.
“I learned how to advocate for what I needed and I was able to get results,” she said. “I was able to get donations – concrete and plant donations, $450 (of perennials), a lot from Home Depot.”
A local landscaper helped design the low-maintenance foliage display in the 64-by-16-foot garden. A local artist worked with other Girl Scouts to help design a mural for the garden, depicting flowers, sunshine and a huge rainbow.
“Scouting has taught me that things around you aren’t just things – everything is connected some way,” Jones said. “We are global citizens and everything you do sparks an effect all over the place.”
The experience at St. Vincent’s has inspired Jones to consider studies in a field that will help children, either in genetics or medical research, she said.
On a recent trip back to St. Vincent’s, Jones said she received several thank-yous for her contribution.
“It’s very humbling, she said. “I didn’t do this because I wanted to put something great on my college résumé. I did this because I saw these kids and saw how they could have a better life. Even though I can’t take them out of St. Vincent’s, I can’t make things better for them, I can make things better for them while they’re there.”
Also see:
For Catonsville couple, Christmas means giving hundreds of trees
Calvert Hall rallies to beat Loyola, 25-22
PrevNext