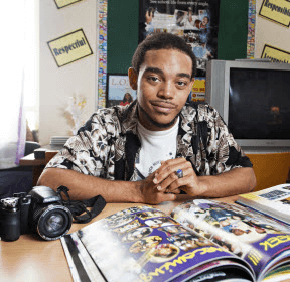 By Paul McMullen
pmcmullen@CatholicReview.org
For a few, valedictorian status or admission to an Ivy League college is cause for celebration.
For Joshua Brown, graduating with honors from Baltimore’s St. Frances Academy June 2 warranted plenty of shout-outs.
The staff photographer for the yearbook and editor of the senior video, Brown will study photography and imaging at the Community College of Baltimore County, Catonsville. His life has already produced the makings of a compelling storyboard.
“He is just a little miracle,” said his mother, Darlene.
Brown’s birth, in Houston, was premature, as his first month was spent in a hospital. As a sixth-grader at the now-closed St. William of York School in Baltimore, he was diagnosed with cystic fibrosis, a recessive genetic disorder marked by lung infections and difficulty breathing.
As a sophomore at St. Frances, with his lung function down to 60 percent, he was hospitalized for a week and missed final exams. ADHD (attention deficit hyperactivity disorder) was an issue his junior year. What would have been a routine dental extraction for another teen turned perilous in February.
During the removal of his wisdom teeth, Brown said that a breathing tube came out of his throat, his oxygen level dropped and that “my heart stopped beating.” That caused another week-long-plus absence from school.
After a brief stint as a long-distance learner, Brown resumed the top-notch work he had been doing since last September. Crediting “time management and my mother,” he earned honor roll status all four quarters during his senior year.
“Joshua has a very involved mom,” said the Rev. Gina Dorsey, academic support coordinator for St. Frances Academy. “He was determined to pass his academic challenges. Now we tease his mother at quarterly reports, she just breezes by and says hi.”
Beyond homework, Brown’s evenings are filled with three sessions on a nebulizer, a drug-delivery device, requiring an hour to 75 minutes. His mother said he takes at least five other medications daily.
“It’s not necessarily frustrating, but it is time-consuming,” he said.
Brown, who was an altar server at St. Bernardine in Baltimore, said he also “used to be into sports a whole lot, basketball, football.” If he is restricted from participating now, he can document the action. Brown has captured images of everything from the Midnight Madness that kicks off basketball season to a visit from its namesake couple to the Drs. Camille and Bill Cosby Community Center at the school.
Brown, who produces his own music mixes, was instrumental in the production of the senior video, which involved editing contributions from his classmates.
“Joshua has a dynamic sense of humor,” Dorsey said. “We will be struggling, doing something for 20 minutes. Josh comes in and makes it right.”
Read about more 2013 stand-out grads here.
Copyright (c) June 14, 2013 CatholicReview.org
PrevNext