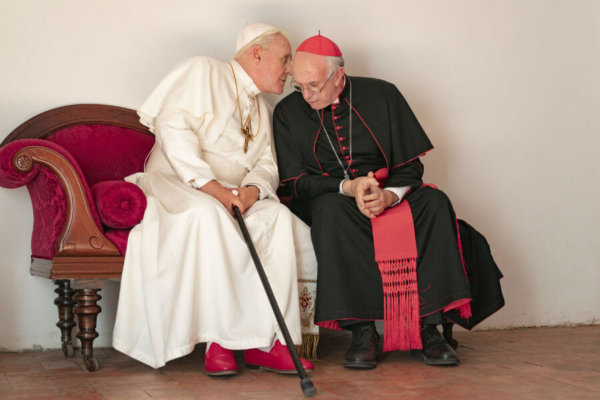 They even go so far as to give brief screen time to two people who label the pontiff emeritus a Nazi.

We know what we’re in for early on as, in the wake of the death of St. John Paul II, then-Cardinal Ratzinger swans around the conclave practically begging his peers to elect him. In fact, it’s pretty well established that he would have much preferred to be left in peace to read his books and play Mozart on the piano.

Flash forward to the main encounter with which the film is concerned, a visit to the Vatican by Cardinal Jorge Bergoglio shortly before his predecessor’s 2013 resignation. By now, the portrayal of Benedict is that of a doddering old buffer so out of touch with the realities of modern life that he has only a vague conception of who the Beatles are. (An earlier scene has hipster Bergoglio, by contrast, whistling Abba’s “Dancing Queen.”)

The filmmakers somewhat counterbalance their hatchet job on Benedict by an extended sequence of flashbacks showing Jesuit Father Bergoglio’s quasi-collaborationist approach to the brutal military regime that came to power in Argentina following a 1976 coup d’etat. They seem to imagine that they have acquired a clarity and certainty about the details of the situation in question that has evaded many others.

Be that as it may, when it comes to the two pontificates, their bias is more than apparent.

Informed Catholic moviegoers will wince at a series of distortions, some of which are downright weird. The future Francis says, for instance, that there was no mention of angels in the church until the fifth century. That will certainly come as a surprise to anyone conversant with the New Testament. The dialogue also has Cardinal Bergoglio informing Pope Benedict that God changes, an obviously heretical statement.

The gravest misrepresentation, however, comes when the script implies that Benedict covered up for the now-notorious founder of the Legion of Christ, Father Marcial Maciel. That monstrous hypocrite may have successfully duped St. John Paul, but Cardinal Ratzinger was a leading force in the revelation of his wrongdoing and, as pope, ordered him to relinquish all ministry and lead a life of penitence and prayer.

Fine performances by the leads and high production values do not compensate adequately for a fast and loose version of recent — or ancient — church history.

Still, “The Two Popes” is not without its charming moments. The concluding scenes, in particular, which find Francis and Benedict watching the World Cup soccer championship together, are touching as well as humorous. But much of the preceding material remains problematic.

The film contains themes requiring mature discernment, scenes of violence, a few sexual references, one mild profanity and a single crass term. The Catholic News Service classification is A-III — adults. The Motion Picture Association of America rating is PG-13 — parents strongly cautioned. Some material may be inappropriate for children under 13.