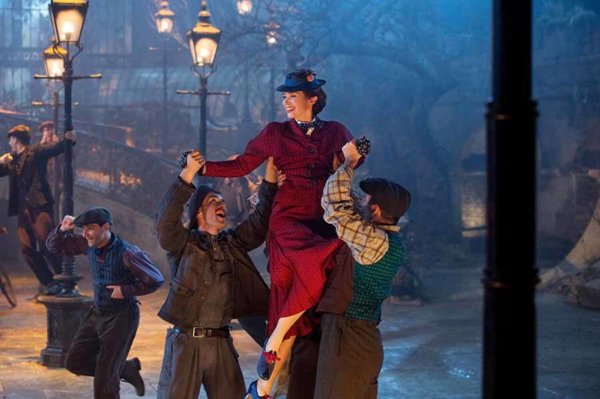 Emily Blunt stars in a scene from the movie "Mary Poppins Returns," a sequel to the 1964 film "Mary Poppins." The Catholic News Service classification is A-I -- general patronage. Not otherwise rated. The Motion Picture Association of America rating is PG -- parental guidance suggested. Some material may not be suitable for children. (CNS photo/Jay Maidment, courtesy Disney)

NEW YORK — It has taken more than half a century, but at long last “Mary Poppins Returns” (Disney). The result is a delightful sequel to the 1964 classic that will divert all but the youngest and most skittish members of the family.

Flashing forward some two decades or so from the Edwardian time period of the original, the follow up finds omnicompetent (and unaged) nanny Mary Poppins (Emily Blunt) swooping into Depression-era London to help Michael (Ben Whishaw) and Jane (Emily Mortimer) Banks — the now-grown siblings she tended as children — face a family crisis.

Michael is a recent widower whose three children, Annabel (Pixie Davies), John (Nathanael Saleh) and Georgie (Joel Dawson), need more methodical care than that provided by their well-meaning but overtaxed housekeeper, Ellen (Julie Walters). And single Jane will require a nudge to end up in the arms of local lamplighter Jack (Lin-Manuel Miranda), as she is clearly destined to do.

There’s also a financial threat looming over the household since seemingly friendly banker William Weatherall Wilkins (Colin Firth) is actually scheming to foreclose on the mortgage. To forestall this disaster, Michael will have to find the certificate showing that his father had a sizable number of shares in the bank — a cache worth more than the debt.

Moments of jeopardy and one verse of a music hall-style song describing how a wealthy lady disguises the fact that she’s rich by imitating Eve’s minimalist fig-leaf wardrobe are as close as the movie comes to anything worrisome for parents. Otherwise, David Magee’s script is squeaky clean.

No spoonful of sugar is needed to make this tasty confection go down, whether at holiday time or during the post-New Year’s lull that generally follows.

The film contains characters in peril and brief, extremely mild risque humor. The Catholic News Service classification is A-I — general patronage. The Motion Picture Association of America rating is PG — parental guidance suggested. Some material may not be suitable for children.