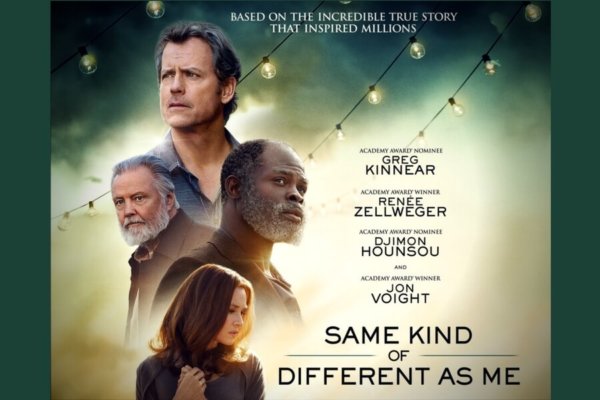 A poster for the movie "Same Kind of Different as Me" is displayed in this promotional photo for the film. The Catholic News Service classification is A-III -- adults. The Motion Picture Association of America rating is PG-13 -- parents strongly cautioned. Some material may be inappropriate for children under 13. (CNS photo/Paramount)

NEW YORK —Viewers committed to scriptural values will be inclined to cut the good-hearted but uneven drama “Same Kind of Different as Me” (Paramount) some slack.

Anxious to repair the damage a recent affair has done to his marriage, Ron reluctantly agrees to accompany his spiritually attuned wife, Debbie (Renee Zellweger), on her visits to a local soup kitchen.

There he gradually overcomes the initial (and intimidating) hostility of his future pal — who is first seen wielding a baseball bat while making angry threats against the other beneficiaries of the charity. He also learns the moving details of Denver’s personal history.

So long as Hounsou dominates the scene, as he does while lyrically recalling his character’s childhood, his redoubtable talent carries the film along.

The other headliners of the cast —including Jon Voight as Ron’s booze-sodden estranged father, Earl —also bring formidable resumes to the project. But they prove less successful in overcoming the limitations of the script. It was adapted from the book — penned by Hall and Moore themselves — by director Michael Carney, Alexander Foard and Hall.

A nondenominational religious subtext and Gospel-congruent values help to hide the aesthetic blemishes. They also contribute to making the movie probably acceptable for older teens, despite the elements listed below.

The film contains some nonlethal violence, a scene of marital intimacy, mature themes, including adultery and racial hatred, sexual references and innuendo. The Catholic News Service classification is A-III— adults. The Motion Picture Association of America rating is PG-13 —parents strongly cautioned. Some material may be inappropriate for children under 13.