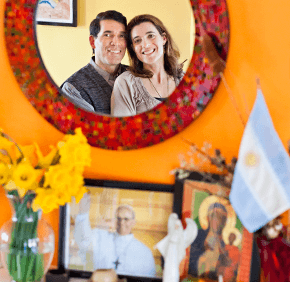 By Maria Wiering
mwiering@CatholicReview.org
Twitter: @ReviewWiering
EMMITSBURG – A photo of Pope Francis is centered on a fireplace mantel in the home of Alejandro Cañadas and his wife, Cynthia Fraga-Cañadas, professors at Mount St. Mary’s University and Seminary. Argentine emigrants from Buenos Aires, the couple admired his ministry long before “Cardinal Bergoglio” became a household name.
Cynthia, 36, keeps a wooden crucifix the pontiff, then bishop, placed around her neck in 1993, when he was blessing a group of Argentine missionaries. She has always treasured it, she said, but it took a new meaning March 13.
The day was Alejandro’s 41st birthday, and Cynthia and their three children – ages 6, 4 and 2 – were at home preparing a celebration when the Sistine Chapel’s chimney began billowing white smoke. Cynthia heard the name “Bergoglio” on TV and was moved to tears.
In his office at the Mount, Alejandro was in a similar state of disbelief. This was the priest he knew from his parish in Buenos Aires, a priest who became a bishop, archbishop and cardinal without distancing himself from the city’s poor.
When Alejandro arrived home, his children met him in the driveway, parading the blue-and-white Argentine flag and shouting “Viva Papa!”
“It is a shock,” Alejandro said of the election of Cardinal Jorge Mario Bergoglio, who confirmed his sister and served as chancellor the Pontifical Catholic University of Argentina, where Alejandro studied. “You cannot believe that a human, real person then becomes the pope.”
The Cañadases graduated from the same Marianist high school four years apart, and, while in college, both joined a Marianist missionary outreach. The group drew the attention of then-Bishop Bergoglio, who would celebrate their Masses, such as the one where he presented Cynthia and other missionaries crucifixes.
That Mass gave Cynthia, then 16, “courage to go forward and spread the good news,” she said. “I had this feeling of ‘Wow, he’s calling me to do an amazing job for Jesus.’”
While dating, the Cañadases spent Sundays in a Buenos Aires slum serving a parish where Father Bergoglio would celebrate Mass on the Feast of the Holy Family. They married in its church in 1998, the year Bergoglio became archbishop.
From 1992 to 2000, when the couple moved to Ohio for graduate school, Alejandro attended daily Mass at the Basilica of San José de Flores. It was the parish the pope grew up in, Alejandro said, and where he returned every March 19 to celebrate St. Joseph’s Feast Day.
“He was a normal priest,” Alejandro said of Pope Francis. “He became a bishop and was the same priest. He was always humble.”
Alejandro is an economics professor, and Cynthia teaches seminarians Spanish. She sees Pope Francis’ election reminding the U.S. church of Latino Catholics’ growing role, and the need for American priests to celebrate the sacraments, especially reconciliation, in Spanish.
For Alejandro, Pope Francis’ election is a sign that “God is really taking care of the church.” He expects the new pope will draw non-practicing Catholics back to the sacraments.
“It’s going to be a huge thing for the church, because we need to renew the church,” he said.
Also see:
New pope inspired her faith says Baltimorean who knew him in Argentina
Baltimore students in Rome among eyewitnesses to the introduction of Pope Francis
Copyright (c) March 28, 2013 CatholicReview.org
PrevNext