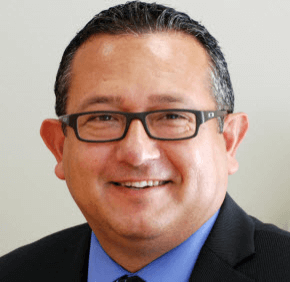 By Elizabeth Lowe
elowe@CatholicReview.org
EMMITSBURG – Mount St. Mary’s University has partnered with the Frederick County Sheriff’s Office to teach law enforcement officers best practices when encountering people with intellectual disabilities.
In-service training sessions on “People with Intellectual Disabilities and the Criminal Justice System” began in January and will run through June.
Last month Mount President Thomas H. Powell and Dr. Gregory Ochoa, dean of the Mount’s Frederick campus, co-facilitated the first session. Ochoa is leading the remaining sessions.
Powell and Ochoa speak from experience. A father of three, Powell has a 43-year-old son with autism and intellectual disabilities. Ochoa, also a father of three, has a 19-year-old daughter with Williams syndrome, a genetic condition that can lead to developmental delays and learning disabilities.
“Everybody is touched by a disability in some way,” said Powell, who developed the idea for the program.
As many as eight million Americans, or 3 percent of the population, have intellectual disabilities, according to information from the Administration for Community Living, U.S. Department of Health and Human Services. Nearly 30 million people are affected by a person with intellectual disabilities in their lifetime.
The Frederick County Sheriff’s Office is requiring its 173 sworn deputy sheriffs to complete the training in response to a January 2013 incident that resulted in the death of Robert Ethan Saylor, a 26-year-old man with Down syndrome.
Three off-duty sheriff’s deputies forced Saylor to leave an area movie theater, according to news reports. Saylor ended up in handcuffs, on the ground and not breathing.
“Catholic universities have a responsibility to reach out to the community,” said Powell, who last May announced his plan to step down as the president of the college at the conclusion of the 2013-14 school year. A comprehensive national search for the Mount’s 25th president is underway.
Frederick County Sheriff Charles A. Jenkins, who attended the first session, said training on the topic didn’t previously exist.
“I believe it (the training) is necessary,” Jenkins said. “It gave me a different insight. We don’t necessarily encounter people with intellectual disabilities every day. We need to know how to communicate, interact with, diffuse situations with these folks.”

Jenkins said he learned how to distinguish between people with mental illness and intellectual disabilities and de-escalate a situation. The deputies are also learning how to dispel stereotypes and misconceptions, think differently when interacting with people with intellectual disabilities and the appropriate response, Powell said.
“It’s not that we want special treatment,” Ochoa said. “We’re here to provide another tool in your (the deputies’) toolbox for when you’re out there working with someone with intellectual disabilities. The biggest thing is that awareness.”
Also see:
Rape awareness should grow, Anne Arundel exec tells Spalding women
Archdiocese argues that banning the box could put vulnerable at risk
PrevNext