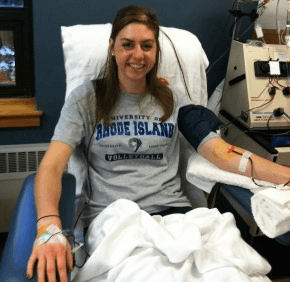 By Maria Wiering
mwiering@CatholicReview.org
In the spring of 2012, University of Rhode Island student Caroline Casey had her cheek swabbed to register her bone marrow with the Be the Match Foundation. At the time, she shrugged at her participation in the football team’s annual donor drive – she didn’t expect anything to come from the simple action.
In August 2013, however, the Rhode Island Blood Center in Providence contacted her: Her marrow was a potential match.
Further testing revealed that she was indeed a match – the sole match for a 32-year-old woman battling leukemia.
Casey, a junior at the Kingston, R.I., university and a graduate of Mount de Sales Academy in Catonsville, said she was hit by a wave of excitement, then anxiety.
It was her choice whether to donate, the blood center told her.
Casey called her “yes” “almost a no brainer” because of her Catholic faith.
“Obviously you choose the option to help somebody, and help them live,” she said.
On Oct. 17, she underwent a daylong procedure to extract her bone marrow.
Casey’s only initial hesitation was her commitment to her volleyball team, she said, because the procedure would require her to take time off during season. After receiving her coach’s blessing, she agreed to the donation.
About one in 500 of U.S. Be the Match registrants become donors, according to the organization.
The procedure came with risks; infection, weakness and flu-like symptoms were all possibilities, Casey said. They paled in comparison to the good her donation could do.
For support, she reached out to a URI football player who had donated marrow in 2011. She also looked to her parents – St. Louis, Clarksville, parishioners Dennis and Susan Casey – and the university football coach, Joe Trainer, who launched URI’s annual drives five years ago. The drives have yielded 11 marrow donations.
Trainer, who left URI this year to return to Villanova, where he previously coached, praised Caroline’s maturity, calling her “wise beyond her years.”
“As someone of great faith, she sees the big picture and the world outside the microcosm of being a student athlete,” he said.
Trainer, who recruited Casey’s brother Luke to play for URI, spent time with her parents before her donation to answer questions and quell concerns.
“It was emotional,” said Susan Casey, who accompanied her daughter during the donation. “Not just sitting there – the whole thing was emotional. … Not the risk, just the magnitude of what you can do to help someone else.”
A nurse, Susan is now trying to organize a bone marrow drive in Howard County after seeing the good that came from her daughter’s donation.
Generosity and service are just part of her daughter’s personality, Susan said. Casey is also active in campus ministry, volunteers at a parish near campus and has twice traveled on mission trips to Nicaragua.
Casey doesn’t know much about the woman who received her marrow donation, including her name, but she recently learned, through a note the woman sent the blood bank, that she was a newlywed and new mom when she was diagnosed with leukemia. The note sounded positive, and Casey took it as a good sign.
Casey may have the opportunity to meet her this fall, near the anniversary of the donation.
Until then, Casey will continue to think of her as “No. 32,” the unofficial spot she and friends assigned her on their volleyball team. Making the woman a Rams player motivated Casey, a middle blocker, on the court, she said.
“Playing for ‘32’ helped me to realize how blessed I am,” Casey said. “I have the opportunity to go to college and play volleyball. I’m healthy, and happy, and I have family and friends and all these things. … The [donation] renewed my gratitude in life.”
Also see:
Basilica rector undergoes bone marrow transplant
Loyola grad gives gift of life to 8-year-old stranger
Church a strong supporter of stem-cell research, just not with embryos
PrevNext