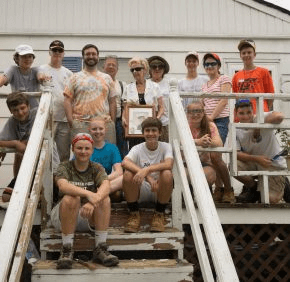 Few high school students would look back on a week of unpaid manual labor as the highlight of their summer vacation, but Margaret “Meg” Protzman, an alumna of Mount de Sales Academy in Catonsville, is an outlier.

Protzman, now 22, enjoyed the one-week service trips with Catholic HEART Workcamp so enjoyable, she returned to Workcamp this summer as a staff member, days after her graduation from McDaniel College in Westminster.

“There are a lot of draws to it,” Protzman explained. “You get to go to cities you’ve never been to before.”

Starting July 1, she and eight other staff members reported to Orlando, Fla., for training, loaded an Enterprise truck with supplies, and drove to successive service projects across the U.S., hitting destinations including Memphis, Denver and Ashland, Mont., each for one-week visits.

Every Saturday, the staff arrived, unpacked and set up a home base where the 250-350 campers, arriving Sunday, would eat, sleep, socialize and worship.

In the words of the Catholic HEART Workcamp website, heartworkcamp.com, they restored “hope to those who have none.”

According to Protzman, each destination had a list of 30 worksites for campers to address. Her responsibility was making sure that the necessary tools got to the right sites, and to procure more supplies if necessary.

“We pretty much went to Home Depot every day of the week,” she said.

After each work day, campers enjoyed a staff-prepared “evening program,” which included praise and worship, lectures and entertainment such as skits, or music from the staff musician.

Faith was front and center, added Protzman, who had been a campus ministry leader her junior and senior years at McDaniel.

She reflected on the camper-staff dynamic.

“As a camper, I looked up to the staff members so much,” she said, “because they had done so much and had so many stories … Now, I’m serving and I’m thinking, ‘These campers are probably looking up to me as a role model.’ ”

As a staff member, the parishioner of St. Mark in Catonsville faced challenges she had never considered as a camper.

“All of the campers were not always pleasant and helpful,” she said. “Most are phenomenal, but you get that one, occasionally.”

Her and her colleagues’ attitudes, she said, “completely influenced” the younger campers.

The community of Ashland was particularly memorable for Protzman.

“It was the most remote place I have ever been,” she said, adding that the lack of cell phone service necessitated the use of walkie-talkies.

“Because it was so remote, it was beautiful,” she said of the small town just east of the Northern Cheyenne Indian Reservation.

The staff and campers, including a group from The John Carroll School in Bel Air, set up at St. Labre Indian School. Protzman remembered one work project in particular.

“By the end of the week, the campers had built a whole wheelchair ramp and deck and skirted this woman’s trailer,” she said, explaining that the skirting would keep frigid winter winds from sucking heat through the floors of the small dwelling.

“That’s going to completely change her life, what they did,” Protzman added. “She was crying because she was so happy.”

She said that tears of joy were not an uncommon sight at “residents’ night,” a specially-designated Thursday evening program that brought campers together with the people they had helped.

Protzman has taken a job with the U.S. government, and her being able to take two months off to return as a Workcamp staff member is unlikely. She hasn’t, however, ruled out chaperoning a group of campers for a one-week trip.

“I would do anything I could to go back,” she said.