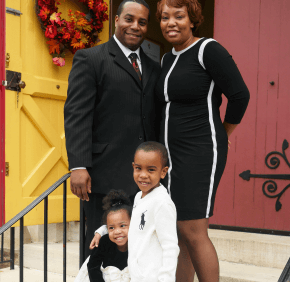 By Kyle Taylor
Special to the Review
Rogelio D’Almeida learned the significance of his Mother Mary Lange Award from his wife, Danielle.
As a youth, she had received the honor through their parish, St Ann in Baltimore.
“It kind of sent chills up my spine,” he said, after she had pointed out the connection. “It made me feel very good and very proud.”
D’Almeida is among 46 people from 16 parishes in the Archdiocese of Baltimore who will receive an award for their leadership, service or youth involvement at the 18th annual Mother Mary Lange, O.S.P. Awards banquet Feb.13 at Martin’s West in Woodlawn.
The program is under the direction of the archdiocese’s Office of Black Catholic Ministries, and perpetuates the legacy of a Caribbean immigrant who in 1829 founded the Oblate Sisters of Providence, the first U.S. religious congregation for black women.
D’Almeida said he was extremely humbled when he learned that he would be receiving the St. Ann’s leadership award. He is being recognized for his efforts in in men’s ministry, as an usher and with young adult ministry.
“I felt humbled and honored that I seemed to stand out to the people at St. Ann,” he said. “Everybody wants to be recognized for something.”
D’Almeida began attending St. Ann in 2001, joined the parish in 2007, married his wife there in 2008 and became a pastoral associate in August 2014. Their children, JJ and Kia, were baptized at the church.
He will also be recognized at the Mid-Atlantic Congress for pastoral leaders Feb. 12-14 at the Baltimore Hilton, as one of seven “emerging leaders” in the archdiocese.
Edie Froix, meanwhile, will be recognized for her leadership at St. Peter Claver and St. Pius V. She has worn a number of hats for more than 20 years, serving as a lector, a member of the sodality and parish finance committee, and participating in parish outreach programs.
She credited her mother and her grandmother for her upbringing in the church.
“I just felt like this is for them, because they made me who I am today,” Froix said, as her voice wavered with emotion. “When I received (notice) I was really shocked, but on the other hand I was truly honored that the members of the church would select me.”
Princess Bridges, a parishioner of St. Gregory the Great, is typical of the youths being recognized. She is a member of youth ministry, a lector and an usher, and is preparing for her confirmation in April.
“I just enjoy helping others and being grateful knowing God has blessed me,” she said. “Sometimes when you look at other people’s lives and see what they don’t have, they can see through your actions that you care for them and that God cares for them too.”
She was the recipient of the 2014 Outstanding Youth/Young Adult Award at her parish, and said the honors are due to her trying to be a positive role model by being selfless.
“Giving back to people as (God) has blessed me and just sharing my blessings helps me grow in my Christian faith,” Bridges said.
A ninth-grader at the Baltimore Polytechnic Institute, she also received a scholarship from the Peabody Preparatory Institute, where she studies ballet and contemporary dance.
Charles Hall, the leadership recipient from St. Ambrose in Park Heights, will be honored posthumously. He died in an auto accident Feb. 5 on Belair Road. He had chaired the parish council, was an usher and participated in parish food preparation and catering.
“Charles is remembered by many to have a generous and loving spirit,” said Capuchin Franciscan Father Paul Zaborowski, his pastor.
The following will be honored at the Mother Lange Awards banquet Feb. 13, in order, the leadership, service and youth categories.
St. Ambrose, Park Heights: Charles Hall (posthumously), Gladys E. Johnson, Emmanuel C. Azike
St. Ann: Rogelio D’Almeida, Anwar Jarmar Jackson, Mickel Daniels
St. Bernardine: Everett Xavier Garnett, Regina L. Belt, Carl D. Reed
Blessed Sacrament: Megan Godfrey, Mary Smith and Ruth Poole (both for service), Brianna Johnson
St. Cecilia: Therese Wilson Favors, Marie Wicks, Nanyamka Aiyana Anderson
St. Edward: Patricia A. Pitts, Eunice Robinson and Marcel Maker (both for service), Zachary Lewis
St. Francis Xavier: Wyona Chambers, Mary English, Maya Roberts
St. Gregory the Great: Monica Oliver, Russell Smith, Princess Joy Bridges
Immaculate Conception: Verlina Knight, Toshiba Greene, Arketa Davis
St. John the Evangelist, Columbia: Ulumma Abii, Chichi Abii, Daniel Jacques
St. Mary of the Assumption, Govans: Gregory Martin, Louise Schuerholz and Denise Blackwell (both for service)
New All Saints, Liberty Heights: Mildred M. Proctor, Amiya Jefferson
St. Peter Claver and St. Pius V: Edie R. Froix, Sharon Williams, Sania Washington
St. Veronica, Cherry Hill: Malvin Neal, Wilhemina Burris, Angelica Brooks
St. Wenceslaus: Alicia Champlin, Melanie Cooper, Breona Shannon
Also see:
Research uncovers new information about Mother Mary Lange
St. Frances Academy students re-enact Selma march
PrevNext