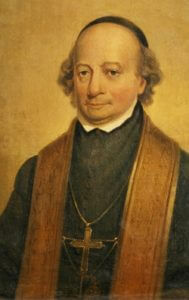 Archbishop of Baltimore, Ambrose Maréchal was born of fairly prosperous parents at Ingré in the Diocese of Orléans, France, on December 4, 1768. Although destined by his parents to study law, he chose instead the priesthood. He entered the Society of St. Sulpice and was ordained in Paris in 1792. He immediately left to join the Sulpicians at the recently established St. Mary’s Seminary in Baltimore. Initially assigned to the Maryland missions, he eventually taught at both St. Mary’s Seminary and Georgetown College before he was recalled to France in 1803. In 1812 he returned to teach at St. Mary’s Seminary until his appointment as coadjutor to Archbishop Leonard Neale of Baltimore. After Neale died, Maréchal was raised to the episcopacy as archbishop of the oldest American archdiocese on December 14, 1817.

To the Holy See he submitted the first truly comprehensive report on the Catholic Church in the United States. The most serious problem, he confided, was the number of schisms provoked by rebellious trustees. Maréchal had to contend with the schisms of Norfolk, Virginia, and Charleston, South Carolina, until 1820, when the Dioceses of Richmond and Charleston were created. To their creation, however, he objected strongly, having not been consulted in the process. He also contested the power of the Jesuits in Maryland, who refused to continue a subsidy provided the two previous archbishops.

In 1821 Maréchal decided to make an ad limina visit to Rome to settle these and other affairs. There he practically dictated the terms of the papal brief Non sine mango of 1822, by which American bishops would be guided in their future dealings with trustees. He was awarded a substantial portion of the Jesuits’ most productive estate in Maryland in lieu of a subsidy and was given a voice in the creation of future sees and the appointment of bishops. The Maryland Jesuits, however, refused to honor the Roman decision and the quarrel continued into the administration of the next two archbishops. The Roman visit, nevertheless, established the archbishop of Baltimore as the principal spokesman for the Catholic Church in the United States.

While Maréchal displayed a decided boldness in his dealings with the Roman officials and the Jesuits, as well as with the Sulpicians who refused to close Mount St. Mary’s College and Seminary of Emmitsburg, he was cowed by his suffragan, the dynamic Bishop John England of Charleston. From the day he arrived in Charleston until Maréchal’s death, England importuned to the archbishop of Baltimore to hold a provincial council to resolve the difficulties that beset the Church in America, a stop Maréchal stubbornly refused to take. He also resented England’s intrusion into the affairs of his suffragan sees.

Although considered by any of his suffragan bishops a man of mediocre talents, especially when compared to England, Maréchal proved an efficient, though sometimes querulous, administrator in his own archdiocese. Although a product of the ancien régime, he readily embraced such American principles as religious liberty and the separation of Church and state and moved easily among the lowly as the elite. He died January 29, 1828 in Baltimore.

Murtha, Ronin J. “The Life of the Most Reverend Ambrose Maréchal: Third Archbishop of Baltimore, 1768-1828.” Ph.D. dissertation, The Catholic University of America, 1965.