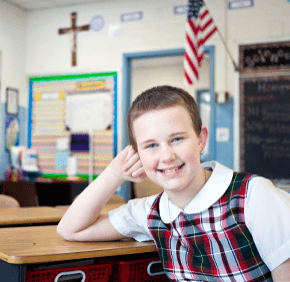 By Elizabeth Lowe
elowe@CatholicReview.org
Twitter: @ReviewLowe
GLEN BURNIE – Emily Kolenda lights up a room with a smile that makes her eyes twinkle.
The Monsignor Slade Catholic School community has rallied around Emily, a fourth-grader at the school, who was diagnosed in January 2012 with acute disseminated encephalomyelitis, an autoimmune disorder.
Most recently hospitalized Dec. 15, Emily received special visitors, as members of the Monsignor Slade community visited and sang carols in an effort to bring her some Christmas cheer.
That outreach is nothing new.
To help defray the 11-year-old’s medical bills, which include chemotherapy in addition to frequent hospital stays, Monsignor Slade has organized fundraisers, including events last month in Sparrows Point and Glen Burnie.
Emily attended the events, which raised several thousand dollars, and said, “It makes me feel like everyone is supporting me.”
In addition, Monsignor Slade students continue to make and sell for $3 apiece Rainbow Loom bracelets, made from small, blue, pink and purple rubber bands, Emily’s favorite colors.
A Catonsville bakery donated a portion of the sales from its Thanksgiving pies to the family, said Kelly Kolenda, Emily’s mother and full-time caregiver.
“I don’t know what people do without family and friends,” Kelly said. “We’ve needed our family and our friends to support us through this.”
At Monsignor Slade, that support system helps transport Emily’s sisters, Megan, 9, and Colleen, 7, to and from the Glen Burnie school.
When she feels well, Emily, like her peers, enjoys playing in the snow, shopping, drawing and making Rainbow Loom bracelets. Her favorite subject is reading.
“She loves Slade and she loves her friends and teachers,” said Kelly, whose family worships at St. Mark in Catonsville. “If she feels well enough to go to school, she’s at school.”
“She has a great spirit,” said Casey Buckstaff, the school’s principal, who was among the carolers visiting Emily in the hospital Dec. 15. “She tries so hard and works so hard. She wants to be here (in school) and when she’s here she doesn’t waste a moment.”
Ashley Stegeman, a fourth-grade teacher at Monsignor Slade who has Emily for homeroom, social studies and science, is inspired by her student.
“It doesn’t seem like anything ever knocks her down,” Stegeman said. “She brightens up the room when she enters it.”
Also see:
Pope celebrates birthday by having breakfast with three homeless men
Good cheer: 13 ways the Archdiocese of Baltimore is spreading warmth in Christmas 2013
PrevNext