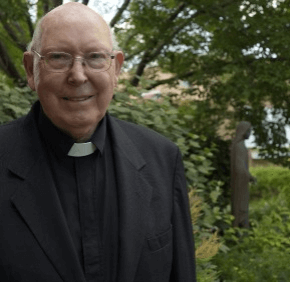 TANEYTOWN – After Monsignor Martin E. Feild offered a funeral Mass for a parishioner of Western Maryland’s St. Peter the Apostle in Oakland, a woman approached. Inspired by the loving manner in which the first-time pastor had conducted the liturgy, she had an important question.

Even though the woman wasn’t Catholic, Monsignor Feild promised he would be there for her.

Thirty years later, Monsignor Feild received a phone call at his new post at St. Joseph in Taneytown, where he was pastor. The woman had died, a family member informed him. Would the priest keep his decades-old promise?

“It was a very busy week at the parish,” remembered Linda Webster, president of St. Joseph’s pastoral council. “We had something at the church that day and an important meeting in the evening. Yet, he said he had to do that funeral.”

Monsignor Feild drove 155 miles to Salisbury to conduct a funeral for a non-Catholic woman he barely knew, only to drive another 155 miles back to Taneytown to attend the parish meeting that same day.

“That’s Father Marty,” Webster said. “He’s such a kind, gentle person. He cares about everyone.”

After 20 years as pastor of St. Joseph and 56 years in active ministry as a priest, Monsignor Feild retired July 1 and took up residence at Mercy Ridge Retirement Community in Timonium.

Raised at St. Mark Parish in Catonsville as the eighth of 11 brothers and sisters, Monsignor Feild first thought of becoming a priest when he was a fourth-grader in the parish school. He was impressed by the priests of St. Mark and the School Sisters of Notre Dame who taught him.

“I liked the idea of helping others,” he remembered. “There’s always a mixture of good and bad in the world. I wanted to do my part to bring in the goodness of the church because the church is basically holy and good. I wanted to be more positive and to try to help people keep strong in their faith.”

After 20 years in Garrett County, Monsignor Feild moved to Taneytown in 1995 as pastor of St. Joseph, a position he held until his retirement.

At each of his assignments, the priest said, he has enjoyed administering the sacraments and getting to know people.

“We hear about the negative families or bad individuals,” he said, “but, if you look, there are so many more who are really good, holy people and families. They are such marvelous keepers and doers of the Word.”

Monsignor Feild stays in touch with parishioners from each of his assignments. St. Peter named one of its parish buildings in his honor, and people from his former posts sometimes traveled to Taneytown to attend parish events when he was pastor.

“There are many good people who appreciate what you are doing for them – and they never forget,” he said.

Very attuned to the liturgical changes brought on after the Second Vatican Council, Monsignor Feild has encouraged parishioners to be active participants in the Mass and not mere observers. Even though he prepared for the priesthood prior to the council, his seminary instructors had anticipated changes such as celebrating the Mass in the vernacular and involving more lay people in the life of the church.

“We thought it would happen 50 to 100 years after we were ordained,” he remembered, “and suddenly it was in just two or three – thank God.”

Monsignor Feild has been active with the Knights of Columbus, the Holy Name Society and the parish sodalities. He has also viewed interfaith and ecumenical outreach as an important part of his ministry, working with the Ministerial Association in Taneytown – a group that recently surprised him with a special tribute that included a proclamation in his honor from Taneytown Mayor James L. McCarron Jr.

In a note published in a recent parish bulletin, Deacon Darrell Smith wrote that some of those who joined the Catholic Church at St. Joseph remarked that “if it wasn’t for the love and kindness from (Monsignor Feild), they probably would not have thought about joining our church.”

“He has always been there with an open ear to listen to our problems,” Deacon Smith said. “He has been there to guide our parish in making decisions, which helped us grow as a church and as individuals.”

The 660-family parish is planning a July 19 retirement celebration in Westminster for Monsignor Feild. More than 375 people are expected.

As he begins his retirement, Monsignor Feild said he will spend more time reading and swimming. He may also take a course at a local university. After taking some time to settle in his new home, he hopes to assist at area parishes.

“I won’t rush into it right away,” he said. “I want to see who really needs the help.”

For those thinking about the priesthood, Monsignor Feild offered some advice.

“I keep telling them that they can be happy and would enjoy it if they make the sacrifice of celibacy,” he said. “Parishioners become your family. You can be happy with the work you do, with the style of life.”