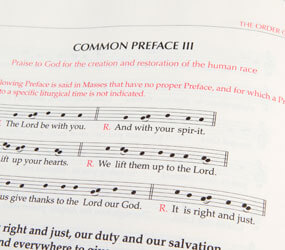 WASHINGTON – When the first Sunday of Advent rolls around Nov. 27 and English-language Masses in the United States are all supposed to follow the updated language in the third edition of the Roman Missal, people’s tongues will undoubtedly trip over some of the changes.

What adds up to only a few dozen different words for the congregation begin with the response to the priest’s greeting and continue through the text of the whole Mass.

The changes in what the priest says during Mass are more significant, with numerous bits of new wording throughout the standard parts of the Mass and in each of the four eucharistic prayers.

For the congregation, the first change is that the response to the priest’s “The Lord be with you,” repeated at various times during the Mass, now becomes “And with your spirit.”

During the penitential rite, whether in Form A, the traditional Confiteor, or in Form B, the congregation’s text changes in a few places.

In Form B, both the priest’s parts and the congregation’s responses change. The prayer now will begin with the priest saying: “Have mercy on us, O Lord.” The people respond: “For we have sinned against you.” Priest: “Show us, O Lord, your mercy.” People: “And grant us your salvation.”

The text of the Gloria changes throughout. It now reads:

“Glory to God in the highest, and on earth peace to people of good will.
We praise you, we bless you, we adore you, we glorify you, we give you thanks for your great glory.
Lord God, heavenly King, O God, almighty Father.
Lord Jesus Christ,
Only begotten Son,
Lord God, Lamb of God,
Son of the Father,
you take away the sins of the world, have mercy on us;
you take away the sins of the world, receive our prayer;
you are seated at the right hand of the Father, have mercy on us.
For you alone are the Holy One,
you alone are the Lord,
you alone are the Most High, Jesus Christ,
with the Holy Spirit, in the glory of God the Father, Amen.”

Both the Nicene Creed and the Apostles’ Creed change by a few short phrases. In the Nicene Creed, “we believe” changes in four places to “I believe,” and “all that is seen and unseen” from the old becomes “all things visible and invisible” in the new. The old phrase “the only Son of God, eternally begotten of the Father” becomes “the only begotten son of God, born of the Father before all ages.”

One of the most difficult words for many people to get used to may be “consubstantial” in the Nicene Creed. It replaces the phrase “one in being with the Father,” becoming “consubstantial with the Father.” Also unfamiliar to the tongue may be this phrasing: “and by the Holy Spirit was incarnate of the Virgin Mary.” That replaces: “by the power of the Holy Spirit he was born of the Virgin Mary.”

The Apostles’ Creed will have fewer changes. Most are the elimination of words, such as the second use of “I believe in” in the space of a few lines. Instead of saying “he descended to the dead,” the line will now be “he descended into hell.” And the wording about the Final Judgment will now be: “and is seated at the right hand of God the Father almighty; from there he will come to judge the living and the dead.”

Another point where the new wording might catch people is in the Sanctus, where the first line will now be: “Holy, holy, holy Lord God of hosts,” instead of “Lord, God of power and might.”

Two memorial acclamations familiar to Catholics will no longer be used in the new missal – “Christ has died, Christ is risen, Christ will come again” and “Dying you destroyed our death, rising you restored our life. Lord Jesus, come in glory.” One completely new acclamation has been added – “We proclaim your death, O Lord, and profess your resurrection until you come again” – and two others were adapted from the previously used acclamations. They now read:

– “When we eat this bread and drink this cup, we proclaim your death, O Lord, until you come again.”

– “Save us, Savior of the world, for by your cross and resurrection you have set us free.”

The last substantial change for the congregation is in the Agnus Dei. The priest’s part now says: “Behold the Lamb of God, behold him who takes away the sins of the world. Blessed are those called to the supper of the Lamb.”

To which the people respond: “Lord I am not worthy that you should enter under my roof, but only say the word and my soul shall be healed.”