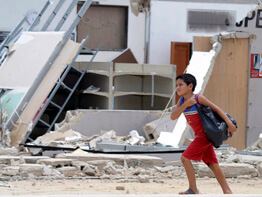 MEXICO CITY – Civil authorities and church workers began distributing emergency supplies and surveying damage the day after Hurricane Dean crossed the Yucatan Peninsula.
Meanwhile, communities on the Gulf of Mexico were bracing for the storm’s second landfall Aug. 22.
Father Francisco Velazquez Trejo, a director for Caritas Mexico in the state of Campeche on the western side of the Yucatan Peninsula, said the hurricane had flooded the island city of Ciudad del Carmen. Dean also caused widespread damage to the region’s agricultural fields and communities of indigenous Maya, many of whom live in impoverished conditions.
“The region’s poorest inhabitants were the worst hit,” Father Velazquez said.
The storm also leveled trees and power lines across a southern portion of the peninsula.
As of early Aug. 22, no deaths or serious injuries had been reported as a result of the storm.
Father Velazquez said his organization – the local affiliate of Caritas Internationalis, the international network of Catholic aid and development agencies – would provide emergency supplies to Ciudad del Carmen residents and was surveying the situation in other parts of his state.
Dean was expected to hit near the city of Tuxpan, in the northern part of the state of Veracruz, in the afternoon hours.
Father Manolo Garcia Gomez, a Caritas worker in the port city of Veracruz, said early Aug. 22 that residents were in their homes and winds and rains were beginning to pick up.
Hurricane Dean slammed into the Yucatan Peninsula as a Category 5 storm in the early hours of Aug. 21, but weakened as it passed over land. At 9 a.m. Aug. 22, Dean was a Category 1 storm, and meteorologists did not expect it to strengthen past Category 2 again. It was advancing at 20 mph.
However, concerns were high that the storm could still produce a deluge that would loosen the earth and cause landslides in mountainous regions inland from the Gulf of Mexico.
Mexico’s Caribbean coast appeared to have escaped the crushing hit that was feared. Flooding, electrical failure and downed trees were reported in Chetumal, 240 miles south of the tourist resort of Cancun, and surrounding areas. In Cancun and nearby areas, damage was light.
Dean also hit Belize to the south, causing damage but no deaths.
Thousands of tourists evacuated the Caribbean coasts of Mexico and Belize before the storm hit. In 2005, Hurricane Wilma pummeled Cancun for a full day and caused an estimated $3 billion in damage. Some recovery efforts from the massive storm are still ongoing.
The Mexican national oil company Pemex evacuated thousands of workers from its offshore platforms and facilities in the Gulf of Mexico in preparation for the storm’s passage.
Hurricane Dean caused at least 13 deaths as it passed over the Dominican Republic, Haiti, Jamaica and the Cayman Islands.