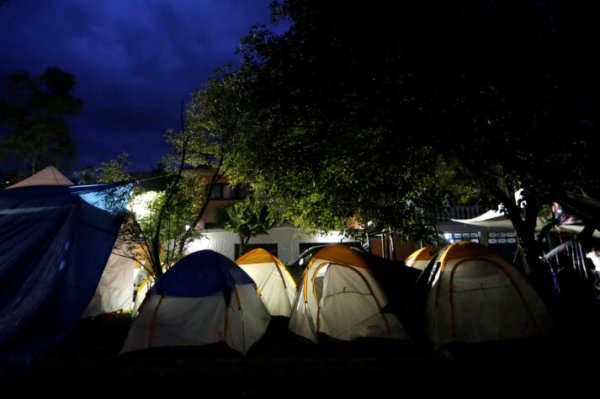 People camp on a street in Mexico City Sept. 27 after their homes were damaged by the Sept. 19 earthquake. Members of a Catholic youth group were shot at and robbed Sept. 26 as they transported earthquake relief to southern Mexico. (CNS photo/Daniel Becerril, Reuters)

MEXICO CITY — Members of a Catholic youth group were shot at and robbed as they transported earthquake relief to southern Mexico, leaving two volunteers hospitalized. Another volunteer was sexually assaulted.

The attack occurred Sept. 26, said a statement from the Archdiocese of Mexico City. Assailants took supplies, the youths’ cellphones and approximately $2,300 collected to purchase items to donate in the Isthmus of Tehuantepec region.

“We are very sad. We have cried at the impotence of the situation, as much for the young people as the girl who was raped,” said the statement. “We hope that both (of the injured) survive. We are still awaiting a medical report on these brave young people.”

The foundation director, Carlos Arvizu, told the archdiocesan publication Desde la Fe one volunteer was shot in the neck, while the other was badly beaten.

“Neither the federal government nor the locals helped with emergency duties and didn’t provided security,” Arvizu said. “This is showing that after the earthquake … it’s total anarchy.”

The Sept. 7 quake struck southern Mexico, leaving almost 100 dead and many more homeless in Oaxaca and Chiapas states. The Sept. 19 quake struck closer to Mexico City and claimed at least 337 lives. The federal government reports the disasters damaged more than 150,000 homes, while church officials in dioceses close to the capital report massive damage to churches.

Mexicans have responded to the earthquakes with an enormous outpouring of generosity and solidarity, including the church, through Caritas, the church’s charitable agency.

Many centers collecting donations for earthquake relief have had to turn away volunteers because so many people were willing to help. Some centers in Mexico City started sending donations such as food, water, medicine and blankets to other hard-hits states.

Young people — including church youth groups — have been especially eager to assist. Seminarians in Cuernavaca formed brigades to remove rubble and turned their seminary into a massive collection center.

“Youth have responded in an extraordinary way,” said Bishop Ramon Castro Castro of Cuernavaca. “All the seminarians are heading out into small towns,” where damage was substantial.

The Archdiocese of Mexico announced it would hold a special collection for earthquake relief and reconstruction Oct. 1.