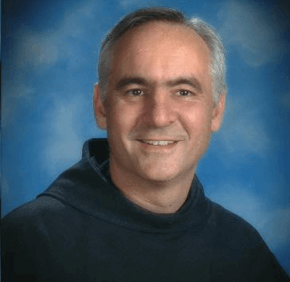 Editor’s note: The following article includes graphic descriptions of alleged abuse involving John Merzbacher.
By Maria Wiering
mwiering@CatholicReview.org
Twitter: @ReviewWiering
Sex abuse victims of former Catholic school teacher John Merzbacher plan to gather for a 7 p.m. vigil June 6 at the former Catholic Community School of South Baltimore, the site of many of his crimes. The vigil is part of efforts to keep their abuser in prison as he wages a legal battle for his release.
The vigil is “an attempt to get together to show solidarity with this group of people,” said Conventual Franciscan Father Timothy Dore, 49, parochial vicar of Most Holy Trinity-St. Mary in Brooklyn, N.Y.
Father Dore said he was victimized by Merzbacher as a student at Catholic Community School from 1973 to 1976. Merzbacher taught at the school from 1972 to 1979.
Merzbacher was convicted in 1995 of six accounts of child rape and sexual abuse against Elizabeth Murphy, who also attended the school in the 1970s. Other alleged victims also pressed charges in the 1990s, but prosecutors decided not to proceed with their cases after Merzbacher was sentenced to four concurrent life terms plus 10 years. Merzbacher appealed the conviction several times but failed to overturn it in state courts.
In 2010, a federal appeal judge ruled that Merzbacher, who has now served 16 years in prison, must be given an opportunity to accept a 10-year plea deal, a deal that his defense attorneys purportedly failed to inform him of during his trial. The U.S. Supreme Court may have bolstered Merzbacher’s case when it ruled in March that the guarantee of effective legal representation applies to plea bargains.
The Maryland attorney general’s office filed a legal brief in early May with the 4th U.S. Circuit Court of Appeals arguing against granting Merzbacher the opportunity to consider the plea deal.
Merzbacher’s attorney H. Mark Stichel told the Catholic Review he plans to file a brief for his client before or on June 14 after receiving a filing extension from the court May 30.
Victims express disbelief over Merzbacher’s current position that he would have accepted the plea deal in 1995, since he was adamant about his innocence throughout the trial and after, Father Dore said.
“How can someone who is obviously not innocent now suddenly say, Oh, I wasn’t given proper counsel regarding a plea deal, or I would have admitted guilt? Come on,” Father Dore said. “He’s again trying to manipulate people to get his way, and that’s his M.O., even from jail.”
To keep Merzbacher in prison, his victims launched an online petition in 2010 which has received more than 2,900 signatures. The goal is 5,000. Archbishop William E. Lori added his name to the list May 16, the day of his installation as archbishop of Baltimore.
Father Dore said he had one particularly abusive encounter with Merzbacher, when the teacher disrobed a female classmate in front of him and pressured him to touch her inappropriately. When he refused, Merzbacher exposed his genitals and ridiculed the boy, he said.
Father Dore remembers feeling embarrassed and humiliated. He didn’t speak of the incident for years. He had no idea of how widespread the abuse was in his middle school, until classmates started sharing their stories because of the trial. Their accounts included Merzbacher raping students at gunpoint and forcing students to have sex with one another. He threatened to kill the students and their parents if they told anyone, according to victims’ accounts.
“He was a master manipulator and really played on the child psyche,” Father Dore said. “He was very much into creating the in-group and out-group, and he was the Pied Piper of the in-group. I think the kids in the in-group unfortunately were molested far more than anyone else.”
Now, Merzbacher’s victims communicate through a private Facebook group they launched to respond to concerns their abuser could be released. Father Dore calls the impact of social media on the group’s efforts “incredible.”
“We didn’t have Facebook 25 years ago. Imagine if we would have,” he said. “Maybe this could have been dealt with a lot sooner.”
Many of Merzbacher’s victims feel betrayed by the institutional Catholic Church, Father Dore said. As a priest, he hopes he can help his classmates heal. He was in seminary when he first sought counseling for his own sexual abuse – which also includes abuse by a Baltimore seminarian who was later ordained a priest, Father Ronald Mardaga, who was removed from ministry in 1986, after Father Dore reported the abuse to the Archdiocese of Baltimore.
Catholic Community School closed in 2009; the site is now a Montessori school. Victims hope that through the vigil they can “reclaim” that space, Father Dore said.
The vigil’s date commemorates two events – Merzbacher’s sentencing in June 1995 and the 1994 funeral of classmate Edward Blair, one of the plaintiffs who filed charges against Merzbacher. Before his deposition was taken, Blair committed suicide. Classmates attribute his death to stress from the trial and the trauma of his abuse, Father Dore said.
At the vigil, victims intend to remember Blair and other classmates who have died, and to show strength as a group of “survivors,” said Father Dore, who plans to offer the vigil’s opening prayer.
Victims not only want Merzbacher to stay in jail for his crimes against them, but also to protect other children, he said. Some victims still fear for their lives because of the threats Merzbacher made four decades ago.
Copyright (c) May 31, 2012 CatholicReview.org
PrevNext