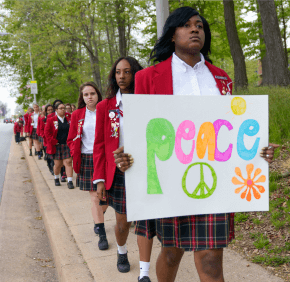 By Erik Zygmont
ezygmont@CatholicReview.org
Twitter @ReviewErik
The 300 students of Mercy High School were silent themselves, standing at the intersection of Northern Parkway and Loch Raven Blvd. in their red blazers, but passing motorists signaled their approval with staccato toots.

The Baltimore all-girls school opened the April 27 school day with the demonstration – a Silent Witness for Peace and Justice in our City and our World – marking the one-year anniversary of the unrest that followed the death of Freddie Gray Jr. while in police custody.

“We showed students there is an opportunity to make a very public stand for the core values we live and teach here at Mercy every day,” said Mary Beth Lennon, president of the school, adding that the display “brought the message of peace and justice to passers-by.”

Becky Hogg, chairwoman of the religion department and director of campus ministry, said the school had “for years” been holding annual October demonstrations at the busy intersection to raise awareness of breast cancer.

Pope Francis’ visit to the U.S. in September 2015 changed the tradition.

Students from Mercy High School stand outside their school April 27 in a demonstration for mercy and peace. (Kevin J. Parks/CR Staff)

“We thought we should stand there and be a witness for peace and mercy, because mercy changes everything, as Pope Francis says,” Hogg said, adding that further adapting the silent witness to remember the Baltimore unrest was the next step.

Samantha Harvey, a senior and founding member of the school’s Social Justice Society, said her grandmother attends services at the Fulton Baptist Church, located at the intersection of Pennsylvania and North avenues, a focal point of the unrest.

“It was something in my backyard, basically,” she said. “I didn’t think something like that would happen ever – it just kind of really hit home.”

Briana Valentine, also a senior and founding member of the Social Justice Society, said the group formed during the unrest in Ferguson, Mo., that followed the death of Michael Brown.

“We wanted to encourage education about the things happening in our society,” she said.

The group, which currently has 13 members, meets monthly and in addition to racial injustice tackles topics such as “female inequality and the inequality of different communities,” Valentine said.

Junior Stefanie Githae said that since the unrest, she has seen many misconceptions on social media.

“Some people were very ignorant,” she said. “They didn’t have all the information.”

“A lot of people are thinking it is African Americans causing this uproar,” added classmate Raecine Singletary. “Things like police brutality are not just with African Americans, but with a lot of races, and not just here in Baltimore, but all over the country.”

“We want to make sure it’s not forgotten and find ways to keep it from happening again,” Githae added.

Lennon emphasized that Mercy High School’s commitment to peace and justice is lived not just in demonstrations but in “what happens in the classroom every day” and in the “one-on-one experiences our girls have with each other, with our teachers and with the Baltimore community.”

“Our Mercy girls take what they’ve learned here, and they’re taking it out and building a better world,” she said.

How to pray the Divine Mercy chaplet