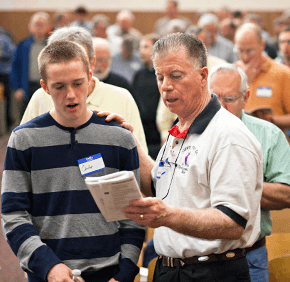 TOWSON – Danny Abramowicz is convinced that too many men have “dropped the ball” when it comes to nurturing their spiritual lives. Caught up in money, sports and the pursuit of pleasure, Abramowicz said, men have become “spiritually bankrupt” and “spiritually broken.”

“It’s time to stand up and get back in shape,” Abramowicz said to more than 450 Catholic men from throughout the archdiocese who gathered May 24 at Church of the Immaculate Conception in Towson for the 15th annual “Answer His Call” men’s conference.

“We need men to stand up to defend the family, defend the church and defend the country,” said Abramowicz, a former New Orleans Saint and the National Football League’s leading receiver in 1969. “We need spiritually tough guys. Our church needs us right now.”

More than 250 confessions were heard by 17 priests in a two-hour span during the conference – including some from penitents who had not received the sacrament in decades. Seeking reconciliation was one of the ways Abramowicz said men could reclaim their connection to God.

“Run away from temptation and run to Christ,” he said, adding that a daily prayer regimen and spiritual readings were other means of strengthening a relationship with God.

Abramowicz is one of the hosts of “Crossing the Goal,” a television program on EWTN designed for men.

Peter Herbeck and Curtis Martin also spoke at the men’s conference, touching on themes of conversion and evangelization. Martin encouraged men to evangelize by enjoying everyday activities such as hunting or playing sports with friends.

“Win them in the midst of that friendship,” said Martin, president and founder of FOCUS, Fellowship of Catholic University Students.

Martin warned that a man can collect money, fame and honors, but if he dies without knowing God, he is a “total, cosmic failure.”

Deacon Bill Witherspoon of St. Peter Claver and St. Pius V in Baltimore said it was inspiring to see men come together in faith. Too many men believe the church “is confining and that it restricts them,” the deacon said.

“Really, the church is about liberation and freedom – the freedom to be able to live our lives in a Gospel way,” Deacon Witherspoon said. “That’s probably the greatest freedom that we can possess – one guaranteed by our founding fathers.”

Larry Glose, a parishioner of St. Thomas Aquinas in Hampden, said he felt “reenergized” by participating in the conference.

“Listening to the speakers and meeting people from other parishes gives you a good feeling that you are not alone,” he said.

It’s not easy to be a man of faith, Glose said.

“It’s probably not as popular nowadays to be Catholic or strong Christians and to live your faith out,” he said. “I think it seems that the world is kind of poo-pooing faith in general. I think it’s going to be much more challenging as time goes on.”

Conference organizers credited much of the success of the event and its record attendance to a new partnership with the Archdiocese of Baltimore. Sponsored by Catholic Men’s Fellowship (CMF) of Maryland, this year’s conference was placed under the authority of the archdiocesan Department of Evangelization. The board of CMF of Maryland was doubled to 17 members and reconfigured to include men of varying backgrounds. A new leadership program was also developed, with 63 parishes represented by “captains.”

“To me, the conference helps me focus on what’s really important,” said Pat Gibbons, a parishioner of St. Mark, Catonsville. “There really is a job that each of us has to do.”