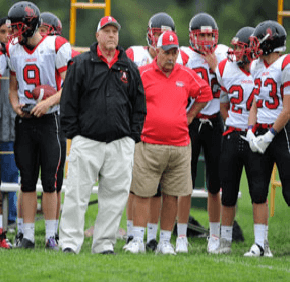 “They are devastated and they are leaning on each other,” said Spalding president Kathy Mahar. “He was, during the entire time, a pillar of strength and such a source of inspiration and hope. He was such a role model for our students. He taught all of us about humility and courage.”

A celebration of  Whittles’ life will be held June 14 at the school’s gymnasium, followed by a Mass at 11 a.m.

Because of the amount of people that Whittles impacted during his life, the school is anticipating an overflow crowd.

Whittles helped make the Spalding football program a top one during his 13 years at the helm.  During recent seasons, Spalding became so successful, they moved up from the Maryland Interscholastic Athletic Association A Conference after appearing in five B conference title games.

Although he did not teach at Spalding, Whittles became beloved by more than his players.

“He would support every part of this community,” Mahar said. “He’d go to concerts, plays, basketball and ice hockey games. “He was completely invested in this community. He was a mentor to me and a mentor to so many people. He was very wise.”

During his illness, the Spalding community used the slogan, “Keep Fighting Coach Whittles” and distributed wristbands and T-shirts with the message.

Whittles’ health struggles were profiled in the Catholic Review last year. The parishioner of St. John the Evangelist in Severna Park and graduate of Our Lady of Good Counsel High School in Olney said his Catholicism was a source of strength.

“I tell you what, you get that diagnosis and you get faith real fast,” he told the Catholic Review. “I do believe that without my faith, family, friends and football, I wouldn’t be here. If God wanted me, he’d already have me. He’s got other plans for me. I want to be able to share what I’m going through and tell people don’t lose your faith. This puts life in perspective.”

Whittles prided himself, perhaps more than anything, on his relationship with wife Diane and their three children – Jessica, Mike and Nick.

“I don’t want to go anywhere anytime soon,” he told the Catholic Review. “I have a grandson. I want to see my other grandchildren. I want to take care of my wife, rather than my wife taking care of me. There’s so much I want to see and do.”

About 150 people from the Spalding community were at a charity golf tournament when they heard the news of Whittles’ passing.

“We were openly weeping,” she said.

Mahar said the school would work with Whittles’ family on a way to honor his memory. She said no one would forget the 57-year-old ball of energy players called “the papa bear of this organization.”

“There was nothing phony about him,” Mahar said. “He was authentic and genuinely passionate about our students.”