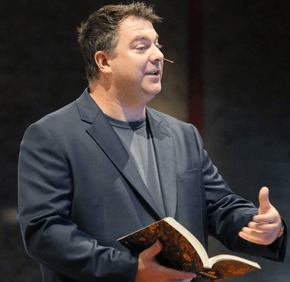 SEVERNA PARK – According to Matthew Kelly, no group of people is in a better position to change the world than Catholics.

But that won’t happen, he told a rapt, all-ages audience of over 750 at St. John the Evangelist Church in Severna Park April 18, as long as Catholics “remain deeply committed to our mediocrity.”

“I think that has to stop,” Kelly said. “Here’s the uncomfortable truth. When it comes to our Catholicism, excellence isn’t even on our radar screen. When’s the last time someone said to you, ‘I want to be an excellent Catholic?’ We have to start striving for spiritual excellence.”

Kelly, originally from Australia, is the president and CEO of Dynamic Catholic, a publishing company that creates catechetical materials for adults and children. His message for the day was one of personal conversion, and it contained a challenge for active Catholics: Reach out to the disaffected of the faith, especially young people who fall away from Catholicism after receiving the sacrament of Confirmation, and disengaged Catholics who only attend Mass on Christmas and Easter.

One way parishes can do this, Kelly said, is to “bring catechetical moments into the 21st century” by moving away from “heavy textbooks” and their connotations of hard work, and using more multimedia and video content at retreats and in class.

One of those 21st century catechetical moments happens every Christmas, but Kelly said that Catholics rarely recognize it.

Since some Catholics only come to church once or twice a year, he explained, it is important for parishioners to pay attention to them.

“We need to reach people where they are,” he said. “That’s where they’re at. We know they show up on Dec. 25. It’s not like we’re surprised. We let them come and go every year, and we don’t even acknowledge them. We complain about how they’ve taken our parking spot or our pew. This needs to change.”

Another place for Catholics to start the process of reinvigorating the church, Kelly said, is to further engage with their own faith.

He recommends attendees either read the Gospel for 15 minutes a day for a year, go to confession regularly, or keep a Mass journal.

“When we listen to the voice of God in our lives, we get focused, energized and invigorated,” he said.

He also challenged the audience to become more active and intentional in their faith, noting that living a Christian life should be evangelical in itself. Instead of “blending in” to the society around them, he said, Christian lives should “stand out.”

“The early Christians changed the world,” Kelly said. “They did that because they lived differently, loved differently and worked differently. If we want the world, the church, to be different, we have to stop blending in all the time.”

Matthew Kilmurry, a parishioner of Our Lady of the Fields in Millersville, is a coordinator of the pre-Cana program there. He said that marriage preparation is one of the other moments when active Catholics can successfully reach out to the disaffected.

“It’s just this one moment,” he said. “Half of them aren’t even Catholic, and typically it’s (marriage prep) during football season. You have this one moment in time to make this impression on them, and it’s a fascinating problem with real potential.”

Jessica Rivera, a junior at Mount Saint Mary’s University in Emmitsburg, came to the event with her mother and two sisters. She was impressed by the packed house.