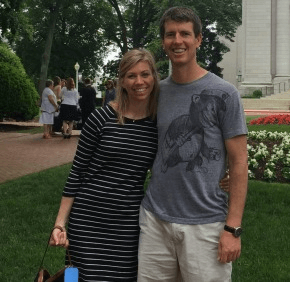 Attention single guys: If that young woman you noticed in church seems to be sitting closer to you this week than last week, there is virtually no chance that it’s anything more than a benign coincidence aggravated by wishful thinking.

But there’s still a chance.

Ellen Pfister and Michael Gries met at the 5 p.m. Mass at Holy Cross in Federal Hill on Oct. 13, 2013. They are now engaged.

“We did the handshake of peace,” he said.

“We had been in the same church at the same time a couple times before we met,” said Pfister, 27, tipping her hand.

“I strategically placed myself around you, I think,” she admitted to Gries.

The electric handshake was followed by a post-Mass introduction. Serendipitously, Oysterfest was happening in Federal Hill, affording Gries and Pfister the opportunity to discover the many things they have in common.

“We kind of hit it off,” Gries said. “Ellen went to the same school my mom went to, St. Mary’s (College) in Indiana.”

“I kind of had some experience in how to deal with St. Mary’s women,” he added.

Neither Gries nor Pfister chose Catholic Community of South Baltimore – which includes Holy Cross as well as St. Mary, Star of the Sea, in Federal Hill and Our Lady of Good Counsel in Federal Hill – for the expressed purpose of spouse-hunting, but they have enjoyed the vibrant young adult scene there.

“I wasn’t necessarily thinking about marriage, but I think I felt that if there was a place where I would meet someone with the same values as me, then church was a good place,” Pfister said.

Gries had moved to Baltimore in July 2013 to perform data analysis for the Orioles.

“When I moved here, I thought (Holy Cross) was a good place to meet somebody similar to me,” he said, adding that he had been introduced to the parish by his parents, who had once attended a wedding there.

Through the young adult program, the couple has done several service projects, including cleaning up a school and participated in post-Mass socials. For the past two years, they have run in the Baltimore race benefitting the city’s Jesuit organizations – Runners for Others: An Ignatian 5K.

Pfister was born into an emphatically Catholic family of five children. Her great uncle is retired Auxiliary Bishop of Philadelphia Martin N. Lohmuller. A product of Catholic schools, Pfister has taught kindergarten at St. Ursula School in Parkville for the last three years.

Gries’ parents were raised Catholic, and after his family attended non-denominational services during his childhood, they returned to the Catholic Church. Gries received his first Communion in eighth grade and was confirmed at age 27.

“The Catholic Church has been a good organization for me,” he said. “Even as I’m bouncing around the city, it’s the thing that stays pretty consistent … It keeps my thoughts on track and helps me stay grounded.”

The couple faced a new challenge in September 2014, when Gries moved to San Francisco to take a job with the Giants.

Though it hasn’t made things easy, the distance helped Gries clarify his feelings.

“This is actually the fourth time I’ve tried a long-distance relationship,” he said, noting that the first three eventually became burdensome.

“This one was different,” he said. “I missed her, and it wasn’t like, ‘Alright, this is our phone time.’ I wanted to talk to Ellen.”

Gries eventually proposed at the same place they had met – the 5 p.m. Mass at Holy Cross.

“I let everyone clear out, and then I told Ellen how I felt about her, and told her I would like to feel like that for the rest of my life,” he said.

Pfister said yes, though Gries could only hear his heart pounding in his ears.

“I was so worried about getting my own part right that I had to clarify that she actually said yes,” he said.

Sister Vicki added that it was “about time,” according to Gries.

“She said she had been checking Ellen’s hand,” he said.

Pfister has found a teaching position at a Catholic school in San Mateo, Calif. The couple plans to wed July 30, 2016.