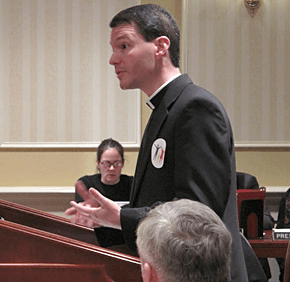 ANNAPOLIS – Framing his support for same-sex marriage in the context of respect for human dignity, Gov. Martin J. O’Malley testified before the Senate Judicial Proceedings Committee Jan. 31 in favor of a bill that would legalize gay marriage.

Supporters of traditional marriage, however, countered that marriage is an institution that has preceded law, and should not be altered.

“We all want the same thing for our children,” O’Malley asserted, “the opportunity to live in loving, caring, committed and stable homes protected equally under the law.”

Father Erik Arnold, pastor of Our Lady of Perpetual Help in Ellicott City, asked lawmakers to recognize that the family, “based on the marriage of a man and woman, is a natural institution that is prior to the state.”
“As such,” he said, “the reservation of marriage to the union of one man and one woman is a fact of nature – not a social prejudice.”

Father Arnold pointed out that the state has not defined marriage. Instead, he said, it has recognized what was already in existence.

“The role of the state has been to acknowledge the wonderfully unique contribution that a husband and a wife make to the building up of our society, to the well-being of our children and our next generation,” he said.

The bill, which O’Malley sponsored and is promoting, establishes a new definition of marriage, one that Father Arnold said “removes from it the very thing that first led the state to acknowledge the special role of the marriage of a man and woman in the first place.”

Mary Ellen Russell, executive director of the Maryland Catholic Conference, emphasized that the faith community has an important role to play in the discussion of same-sex marriage.

“Every person’s faith has to do with trying to uncover the truth about who we are as human beings,” Russell told committee members, “about who we are as a human society – about why we’re here on earth. That perspective is incredibly critical to the discussion we have here.”

Russell said no public-policy decision is made without some kind of moral judgment. Giving same-sex relationships the same status as traditional marriage is an attempt to “define into law two things that are not the same,” she said.

The Rev. Derek McCoy, leader of the newly formed Maryland Marriage Alliance, said society should “protect and strengthen marriage and not undermine it.”

“We need to understand that Marylanders are separated on this issue,” he said, “but it’s a deeply passionate thing in the root and heart of many communities and many people’s lives.”

The Maryland Catholic Conference, which represents the state’s Catholic bishops in Annapolis and supports the Maryland Marriage Alliance, noted that laws already exist to provide certain legal benefits to those in same-sex relationships. Several proponents of the bill, however, argued that same-sex marriage is a civil right.

“All couples, regardless of sexual orientation, deserve the same legal protections under the law,” said Baltimore Mayor Stephanie Rawlings-Blake.

Protestant and Jewish leaders testified for and against the bill, with the Episcopal Diocese of Maryland submitting written testimony asking for the bill’s passage.

“In states where same-sex marriages are legal, Episcopal clergy have the option of offering a pastoral response to couples who seek a blessing from the church,” the statement said. “Marylanders deserve this same legal opportunity.”

Bill supporters said protections have been incorporated into the bill to exempt religious institutions from recognizing marriages that go against their teachings. Russell contended in written testimony that those exemptions are limited.

“The provisions in Senate Bill 241 that supposedly ‘exempt’ religious institutions from recognizing marriage in violation of their beliefs cannot possibly encompass the host of situations where conflicts will arise,” she said. “Further, the exemptions do nothing to protect the freedom of individual to act in a manner consistent with their deeply held beliefs about marriage.”

Cardinal-designate Edwin F. O’Brien had asked O’Malley not to support the gay marriage bill. The cardinal-designate has spoken with approximately 10 Catholic members of the House of Delegates on the issue.

The Senate passed a similar bill last year, but it failed in the House of Delegates. This year’s measure is expected to pass the Senate, but will face a battle in the House.