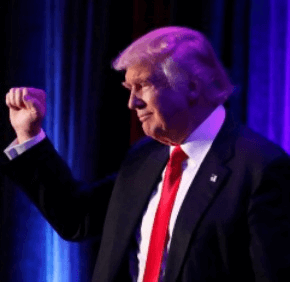 Maryland Congressman Andy Harris, a fellow Republican, expressed hope that some of the goals of the pro-life movement might be reached during Trump’s presidency.

“This is great news for the pro-life movement,” Harris said, noting that he expects the president-elect will nominate pro-life judges and believes that those judges “won’t want to redefine marriage either.”

He referenced Trump’s promise to nominate a Supreme Court justice in the mold of Justice Antonin Scalia, who died in February.

“Finally, I believe we are going to be able to stop the preferential treatment – both domestically and internationally – that has been shown by the Obama administration for Planned Parenthood,” said Harris, a parishioner of Christ the King in Towson.

Things could move quickly on that front, he added.

“We’re in discussions now on whether to just delay government funding bills until Trump takes office,” said Harris, who won his own re-election in the 1st District Nov. 8.

Mary Ellen Russell, executive director of the Maryland Catholic Conference, the legislative lobbying arm of the Maryland bishops that is not affiliated with either major political party, was surprised – like many others – by Trump’s victory.

“It’s such an astonishing spectacle of the will of the American electorate to defy politics as usual, regardless of how you feel about the outcome,” she said. “I hope that awakens in everybody on both sides of the aisle to the power of our vote.”

Russell said that she believes “the role of the Catholic Church in the political forum is going to become more and more critical.”

“It’s one of the very few groups – very non-partisan – that can really pull both sides of the aisle together to work on real common good,” she said.

She did not elaborate, but many in the Catholic sphere have speculated that Trump’s presidency might spell the end for the U.S. Health and Human Services mandate that, under the Obama administration’s interpretation of its Affordable Care Act, requires employers to either include contraceptive coverage in their employees’ health care insurance, contrary to Catholic teaching, or to participate in that coverage.

The Little Sisters of the Poor recently fought a long battle against the mandate before the Supreme Court, which eventually declared that the religious order could not be fined. The court ordered the government to work with the lower courts to come up with a way to fulfill the mandate without forcing the Little Sisters – and the other religious organizations that were part of the case – to participate.

Russell said that if the church doesn’t have to expend so much energy on such battles, it can “devote more resources to causes that really get to who we are as Catholics – protecting the most vulnerable in our society as well as immigrants.”

She also said that she hopes that both the Democratic and Republican parties see the election as a “wake-up call.”

“They need to make room for people who hold very deep, core religious values, and don’t feel like they have a real place to be comfortable in either party,” Russell said.

She referenced “An Open Letter to Hillary Clinton Regarding Religious Freedom for Black Americans,” sent to the Democratic presidential candidate at the end of October. The letter calls for justice for the poor and the unborn and an end to inner city violence.

The letter lambasts what it calls “open contempt for religious freedom” from within the Clinton campaign, referring to emails purportedly revealed by Wikileaks in which “key players on (Clinton’s) staff have sought to subvert Catholic teaching on sexuality by planting externally funded groups in the church to advance a politically correct agenda.”

“We must resist what Pope Francis has called the ideological colonization of people of faith,” states the letter, which has among its signers the Rev. Dr. Frank M. Reid III, an A.M.E. bishop and former pastor of Bethel A.M.E. Church in Baltimore.

“We could have written that ourselves,” commented Russell.

Rev. Reid was a member of an interfaith delegation that accompanied Baltimore Archbishop William E. Lori to Rome in the winter to pray for Baltimore. On March 2, the group met Pope Francis.

Russell said she hopes such group efforts become the norm, during Trump’s presidency and beyond.

“My hope is that when it comes to the faith community, there can be greater collaboration to advocate together for our common values,” she said.