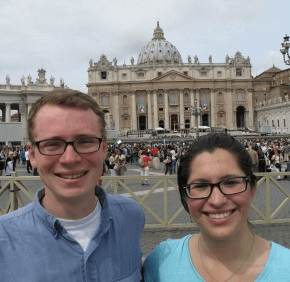 By Paul McMullen
pmcmullen@CatholicReview.org
Twitter @ReviewMcMullen
UPDATED May 2, 2014 6:30 a.m. ROME – When the week began, the biggest gatherings of humanity Tommy O’Donnell and Briana Ciccarino had ever encountered were at rock shows, U2 at M&T Bank Stadium for him, Bruce Springsteen at old Giants Stadium for her.
Then they spent Easter Sunday in St. Peter’s Square, sharing the Eucharist with the Holy Father and hundreds of thousands. As April 26 becomes April 27, they will be there, trying to stake out a view for the canonizations of Blessed John XXIII and Blessed John Paul II.
O’Donnell, Ciccarino and 20 of their schoolmates from Loyola University Maryland in Baltimore picked a very good semester to study abroad. They are here under Loyola’s partnership with The Catholic University of America and its educational arm in the Eternal City.
“We were accepted into the program February last year, before Pope Benedict resigned,” Ciccarino said.
“We had no idea we were going to be here for this,” O’Donnell said.
He went to St. Mark School in Catonsville, and is a 2011 graduate of Mount St. Joseph High School, majoring in English and minoring in theology.
Ciccarino, from Westwood, N.J., worships at Assumption Parish in nearby Emerson. She studied with the School Sisters of Notre Dame at Academy of the Holy Angels in Demarest, and is majoring in Global Studies and minoring in Italian.
Both had writing and studying to do at the homes of their respective host families before heading back into St. Peter’s Square, as the semester is coming to an end and they return home the first Sunday in May. Both live the Gospel Pope Francis and his predecessors preached.
O’Donnell has volunteered at St. Ignatius Loyola Academy in Baltimore, interned as a campus minister and spent spring break 2013 on a prison reform outreach that included several days with the inmates at the Patuxent Institution, a correctional facility.
Ciccarino is active in Loyola’s Center for Community Service and Justice, and through an outreach has brought sandwiches, drinks and toiletries to people experiencing homelessness on Fayette Street.
The two sat on the steps surrounding St. Peter’s Square the morning of April 26. The Vatican tour line snaked entirely around the Square, but one batch of Italians sang the Prayer of St. Francis – “Make me an instrument of your peace” – nuns from Poland posed for group photos and the spirit was palpable.
“This is surreal,” O’Donnell said. “You see it on TV, but to sit down in St. Peter’s Square less than 24 hours before the canonization, and know I am coming back after I do some studying …”
Ciccarino’s parents, Paul and Maryann, were in town the previous weekend and joined her for Easter Sunday Mass.
“My Dad said, ‘I always thought the people in St. Peter’s Square were crazy,’ and now I’m doing the same thing,’ ” she said. “People are willing to travel halfway around the world because they all believe in God and Jesus, which is really cool.”
She said “This is overwhelming, but in a good way,” which O’Donnell picked up on.
“At a rock concert, there is a lot of energy and music, and it’s always loud,” he said. “When people come to see Pope Francis, it is different.
“People are singing and chanting, but when he shifts from his people mode, like he is at the weekly audience, to prayer mode, so serious and spiritual, without looking at you, he says ‘I am praying with you.’ ”
In an email to the Catholic Review, O’Donnell explained that the two returned to Via della Conciliazone, the boulevard which feeds into St. Peter’s Square, the evening of April 26 for a long night of “sleep” – which meant “sitting on our backpacks and having to move a few yards ahead every two hours.”
“Around midnight police announced that a 9-year-old French girl named Bernadette was lost in the crowd and her mother was looking for her,” he wrote. “We said the rosary with some other U.S. college students from Christendom, and a few Italians joined us.”
They finally got to the rim of St. Peter’s Square, where they got a first-hand look at the history on the altar, where emeritus Pope Benedict XVI was among the concelebrants with Francis.“Seeing them together was an amazing experience,” O’Donnell wrote.
He contrasted the scene on Saturday with the liturgy that followed Sunday morning.
“Around us were plenty of Polish pilgrims, who had a tremendous sense of reverence,” he wrote. “Even though we were over two football fields from the altar, there was near complete silence from 9:50 a.m. and through the entire liturgy.
“Many pilgrims attempted to kneel at the consecration, which was difficult due to being packed like sardines, and despite difficulties … thousands of people trying to receiving communion was done with tremendous politeness and reverence for the Lord.”
Also see:
Archbishop Lori praises pilgrims braving the crowds
Archivist: John Paul II display offers ‘chance to relive’ new saint’s Baltimore visit
Pilgrims follow saints’ examples to Rome
Our Lady of the Mountains parishioner feels at home in Italy, with religious men and women
The canonizations of two popes, by the numbers
Pope John Paul II’s visit to Baltimore touched many lives
Blog: A look back at Blessed John Paul II’s 1995 visit to Baltimore
This article was originally published April 26, 2014.
PrevNext