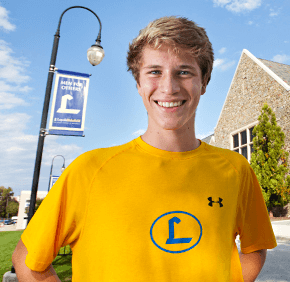 TOWSON – Tyler Spear’s coaches and teachers notice his leadership, in and out of athletics.

Spear is a junior at Loyola Blakefield, where he helps direct the school’s freshmen retreat in mid-November and sits on the honor board. Selected to be a peer leader, Spears uses that opportunity “to have that same example on them (freshman)” as upperclassmen had on him.

A member of Boy Scouts of America Troop 497, sponsored by St. Joseph Parish in Cockeysville, Spear expects to become an Eagle Scout in spring 2013.

“I just enjoy hanging out with my friends and camping,” Spear said.

For his Eagle Scout project, Spear mulched and worked to improve the soccer field and benches at his home parish, Church of the Immaculate Conception in Towson. He has been an altar server and lector.

Spear, who attended kindergarten through eighth grade at St. Joseph School in Cockeysville, said his Catholic education and faith are important to him and have “made a difference of God playing an active role in my life.”

Growing up, Spear was a member of soccer, lacrosse and swim teams in Cockeysville and Springdale. His focus is now on running. A varsity athlete since his sophomore year, Spear runs on Loyola’s cross country team in the fall and track teams in the winter and spring.

He continues to improve because of “lots of work. It just pays off in the end.”

Spear credits his father, a high school runner, as “a really big motivational tool” in cultivating his interest in the sport.

With a 5K personal best of 15 minutes, 59 seconds, a modest Spear said “I would never describe myself as being very fast.”

The Dons are favored to win their fourth straight Maryland Interscholastic Athletic Association championship Nov. 7 at Oregon Ridge Park in Cockeysville. A year ago, Spear was eighth among all runners at the MIAAs.

Spear has not yet applied to any colleges, but plans to run competitively in college and is considering majoring in pre-med.

“It always clicked,” Spear said of science. “It’s so easy to study simply because I like it so much.”

Spear, who has a 3.8 GPA, takes honors and advanced placement courses.

“He came as an eighth-grader and was very interested in the program,” Albornoz said. “It was almost like he expected to be where he is now. He had very little experience. He’s about as good a kid as I ever had.”

“In cross country, you want your upperclassmen to be good role models and he’s just a great kid,” Cucuzzella said. “We have two freshmen on varsity this year and he’s done a great job of taking them under his wing.”